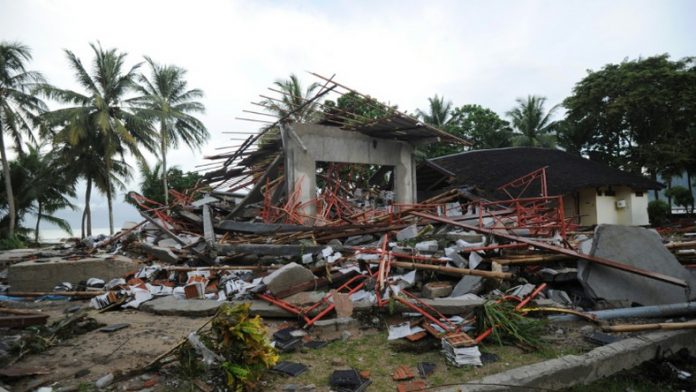 JAKARTA: The death toll from a volcano-triggered tsunami in Indonesia has risen to 281, with more than 1,000 people injured, the national disaster agency said Monday, as the desperate search for survivors ramped up.
“The number of victims and damage will continue to rise,” said agency spokesman Sutopo Purwo Nugroho.
As of Monday morning, the death toll reached 281, up from 222 the night before, while 1,016 people were injured and 57 were missing, according to Indonesia’s disaster agency.
The tsunami damaged or destroyed at least 611 homes, 69 hotels and villas, 60 small shops and 420 boats, said Dr Sutopo Purwo Nugroho, spokesman for National Disaster Mitigation Agency (BNPB).
Rescue teams used diggers and other heavy equipment to haul debris from the stricken area around the Sunda Strait on Monday, as thousands were evacuated from the affected region.
“The military and police are searching the ruins to see if we can find more victims,” said Mr Dody Ruswandi, a senior official at the disaster agency, adding that the rescue effort was likely to last a week.
The rainy season could hamper rescue efforts.
“It’s already raining heavily and the winds are strong so we’ve only got a short timeframe to evacuate people and clean up,” said Indonesia’s public works minister Basuki Hadimuljono.
Indonesian President Joko Widodo was scheduled to visit the area on Monday, less than three months after a quake-tsunami killed thousands of people around the city of Palu on Sulawesi island.
Waves as high as 3m hit the coast of southern Sumatra and the western tip of Java around 9.30pm last Saturday after a volcano known as the “child” of the legendary Krakatoa erupted.
“The number of victims and damage will continue to rise,” said Dr Sutopo.
Many of those killed were tourists, as the western coast of Banten is a popular tourist destination.
“According to preliminary data, there are no foreign casualties, only Indonesians,” said Dr Sutopo,
A press statement issued by Singapore’s Ministry of Foreign Affairs on Sunday (Dec 23) said that there were no reports of Singaporeans affected by the tsunami.
Singapore Red Cross is pledging S$50,000 in humanitarian aid to support affected communities. The contribution will support disaster recovery efforts and fund the purchase and distribution of relief items – including water filtration systems, blankets, sleeping mats and household kits, said the agency in a press statement.
The coastal areas most severely affected by the tsunami were Pandeglang regency, Serang, and South Lampung. In Pandeglang regency, most casualties were reported at the Mutiara Carita Cottage Hotel, the Tanjung Lesung Hotel and Sambolo village.
The tsunami was caused by an abnormal tidal wave surge due to a full moon and an underwater landslide following the eruption of the Anak Krakatau volcano located in the middle of the Sunda Strait.
Dr Sutopo said there had been no warning about the Sunda Strait tsunami because Indonesia did not yet have any early warning system for tsunamis caused by underwater landslides or volcanoes in the sea.
The Meteorology, Climatology and Geophysics Agency (BMKG), the Geological Institute, the Agency for the Assessment and Application of Technology (BPPT) and the Ministry of Maritime Affairs are still continuing their investigation to confirm whether the tsunami had been caused by Anak Krakatau’s volcanic activity.
“This is because the activity (of the volcano) was relatively low yesterday. There was only a flow of magma and the hurling of incandescent rock, much smaller than the eruptions in October and November,” Dr Sutopo said on Sunday (Dec 23).
Anak Krakatau, which forms a small island in the Sunda Strait between Java and Sumatra, emerged around 1928 in the crater left by Krakatoa, whose massive eruption in 1883 killed at least 36,000 people and affected global weather patterns for years.
“The likelihood of further tsunamis in the Sunda Strait will remain high while Anak Krakatau volcano is going through its current active phase because that might trigger further submarine landslides,” said Dr Richard Teeuw of the University of Portsmouth in England.
Unlike those caused by earthquakes, which trigger alert systems, these tsunamis give the authorities very little time to warn residents of the impending threat.
“It happened very quickly,” said survivor Ade Junaedi.
“I was chatting with a guest at our place when my wife opened the door and she suddenly screamed in panic. I thought there was a fire, but when I walked to the door I saw the water coming.”
Volcano-related tsunamis are not uncommon.
An eruption in 1792 in Japan created waves that were several hundred feet high. Landslides during the 1980 eruption of Mount St Helens in Washington spawned large waves in a lake nearby. …Agencies