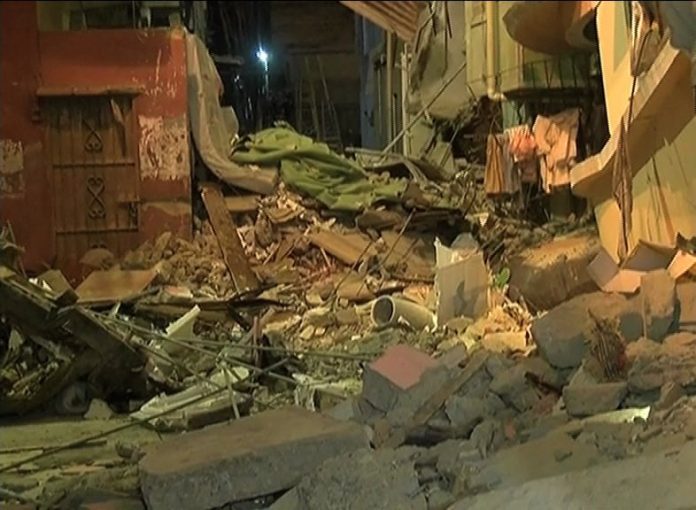 KARACHI: The death toll from four-storey residential building collapse in Karachi’s Rizvia Society has reached 16 after rescue workers retrieved dead bodies of a man and a minor boy from debris on late Thursday night.
The building had initially been constructed as a four-storey complex, but the builder was constructing fifth floor in violation of construction rules due to which it caved in.
Two houses adjoining the building also collapsed. According to residents of the area, a number of people are still suspected to be trapped under the rubble. Rangers, police and rescue teams are busy in rescue operation.
Rescue sources informed that seven women and three children were among the dead. They also informed that 24 other persons received injuries and were shifted to hospital.
Meanwhile, Chief Minister of Sindh (CM) Murad Ali Shah has taken notice of the incident and sought report from the concerned authorities.
Inspector General of Police Mushtaq Mahar has directed Central Senior Superintendent of Police Mohammad Arif Aslam Rao to head the rescue operation in the area.
On the other hand, balcony of a building in Karachi’s Federal B area caved in, killing one man and injuring 10 others including three children.
The rescue officials, while reaching the spot, shifted the affectees to the hospital for treatment.
It is pertinent to mention that this is the fourth building collapase of Karachi in last two years. The government has declared over 1500 buildings as dangerous.