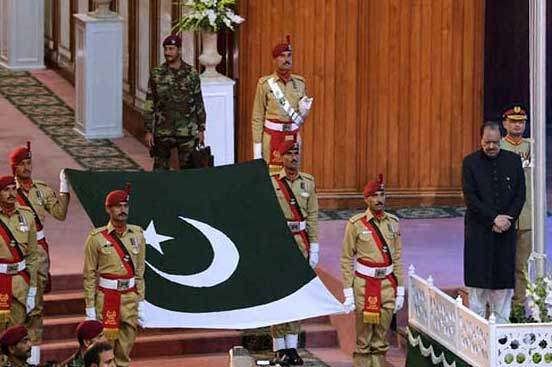 ISLAMABAD: President Mamnoon Hussain has said that a strong, developed and a democratic Pakistan is destiny of the nation.
He was addressing the nation after unfurling national flag along with Prime Minister Nasir-ul-Mulk at the central flag hoisting ceremony held at Jinnah Convention Centre in Islamabad on Tuesday.
The ceremony was attended amongst others by Chairman Senate Sadiq Sanjrani, outgoing Speaker National Assembly Sardar Ayaz Sadiq, the caretaker cabinet members, political leaders of different parties, diplomats and the services chiefs.
He said this year the general elections coincided with the independence day. This also envisages a message that the power of taking decisions in the country rests with the people who also achieved this country through a democratic struggle. He said the people of the country made a stamp on this principle by fully participating in the general elections on 25th July. He said the people have proved that only those laws will be applicable in the country which will be enacted by their representatives.
The President said it is a matter of satisfaction that there is consensus in the nation on the fair and transparent conduct of elections. This is the reason that the opposition and the government prepared election reforms act which gave sweeping powers to the election commission of Pakistan. He said that the dream of a fully sovereign and independence country can only be achieved by strengthening the institutions. He said if somebody has reservations on the election process, these should be removed by the election commission of Pakistan.
He prayed the God Almighty to help the new government in addressing the problems of the people.
The President pointed out that the last general elections were held in difficult circumstances as the areas in Khyber Pakhtunkhwa and Balochistan were rocked by terrorist acts. He said we salute the nation for ensuring the conduct of the general elections through their participation. He said we also pay tributes to the security personnel who rendered their lives for revival of peace and eradication of terrorism in the country.
Mamnoon Hussain underlined the need for promotion of harmony and cohesion in the society to put the country on the path of progress as envisioned by the founding fathers.
The President said Pakistan is the hope and a blessing of God Almighty for the creation of which our forefathers gave unprecedented sacrifices. It is our responsibility as well as of future generations to turn the country into the one dreamt by the founding fathers. To achieve the national objectives, we will have to rise above all sorts of petty differences and personal interests. He said the political leaders, intellectuals and the media will also have to play their role for promotion of unity and steer the country out of current challenges faced in the areas of economy, education and others.
Mamnoon Hussain said it is a matter of satisfaction that our young generation is laced with the spirit of patriotism and wanted to take forward this country. But, he said, it is also important that efforts are also made to keep our children aware of the sacrifices rendered by our forefathers for the country. He said celebrating the Independence Day with full zeal and zest is one way to educate them about our history.
Turning to outstanding Kashmir dispute, the President said Pakistan will continue to extend moral, political and diplomatic support to their Kashmiri brother in their just struggle for right to determination. He also urged the international community to raise their voice so that the Kashmir people could get their inalienable right.
Earlier, sirens were sounded to herald the flag-hoisting ceremony and national anthem was played. On the occasion, school children also presented national songs.