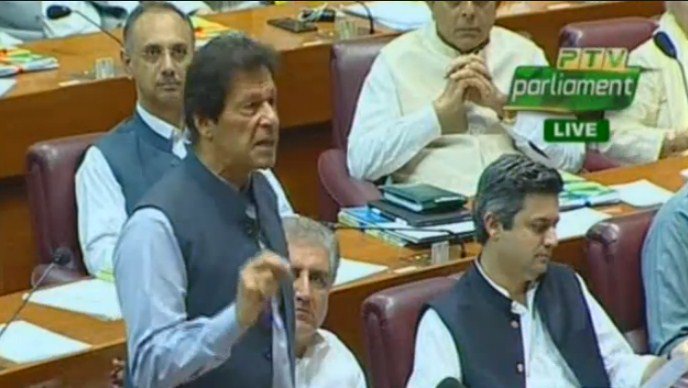 ISLAMABAD: Prime Minister Imran Khan says the devaluation of rupee occurred due to current account deficit of 19.5 billion dollars the PTI government inherited.
Speaking in National Assembly this afternoon, he said the biggest reason of shortage of dollars in the country is money laundering which was used by previous ruling elite.
He said when ruling elite engages in practice of money laundering, it is not in a strong moral position to stop other people of doing so.
He said fake accounts were also used for siphoning of money to take it abroad. The Prime Minister regretted that Public Accounts Committee was being chaired by a person who had allegations of corruption.
Imran Khan said in Western countries, it is parliament’s job to protect the interests of people. He said in Pakistan those people are making speeches that are facing allegations of stealing public money. He said Sharif family made corruption through Hudabiya Paper Mills and Hill Metals. Imran Khan said we have to balance our current account deficit.
Imran Khan said today those people are talking of selection, who were themselves manufactured in the nurseries of dictatorships. He questioned how those people can talk of corruption, who are themselves tainted with corruption.
The Prime Minister said when the government came into power, all public institutions were facing record losses.
Imran Khan said it is heartening to note that 30 percent reduction has been made in this account. The Prime Minister warned that there will be a complete crackdown on money laundering. He said remittances of overseas Pakistanis are increasing through legal channels. He said all out facilities are being provided to lure the foreign investment into the country. The Prime Minister from next week, new schemes will start launching. He said imports have also been reduced and more work is being done in this regard.
The Prime Minister said all measures are being taken to protect the poor classes from the burden of inflation and it is passed on to those segments of society only who can afford it.
Imran Khan said the subsidy of 217 billion rupees has been given to protect the 75 percent consumers of electricity.
He said industrialization is key to national development and we will make all out efforts to reinvigorate the industry.
The Prime Minister congratulated his team and party members for actively participating in the budget session. Imran Khan also appreciated the role of PTI allies in standing united with the ruling party.