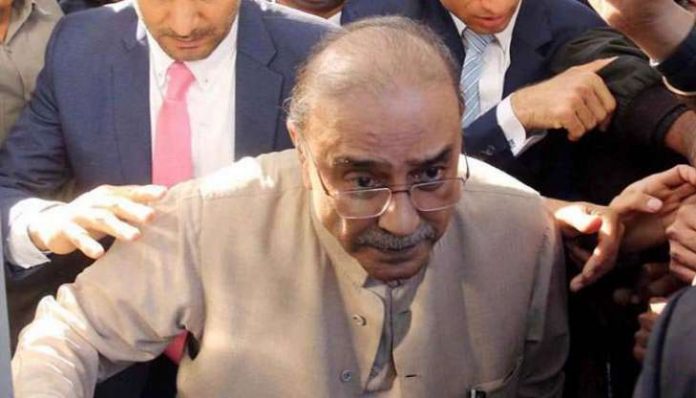 KARACHI: A few medical reports of former president Asif Ali Zardari – who has been undergoing medical treatment at the Ziauddin Hospital in Karachi – have been released on Sunday.
Moreover, doctors are likely to continue Mr Zardari’s treatment for the next few days as the former president will continues to undergo a range of tests for his possible cardiac complications.
Doctors will take a decision for performing his angioplasty after analysing his medical reports.
Zardari was shifted to the Ziauddin Hospital last evening He was taken to Karachi from Islamabad in a Sindh Government’s LG-45 Aircraft. Sindh Chief Minister Syed Murad Ali Shah himself traveled with the Pakistan Peoples Party (PPP) co-chairman in the aircraft.
Zardari traveled from the aircraft to the airport lounge on a wheelchair and was received by PPP Chairman Bilawal Bhutto Zardari.
Zardari was released on medical grounds after an accountability court in Islamabad issued separate robkars [mandamuses] in the Park Lane Estate Company and the money laundering through fake bank accounts cases against him on Thursday.
After submission of surety bonds, the robkars were dispatched to the superintendent of the Adiala Jail.
The Islamabad High Court (IHC) granted bail to Mr Zardari on medical grounds in the same cases.
IHC Chief Justice Athar Minallah headed the bench which conducted the hearing. The court directed the erstwhile president to submit two surety bonds worth ten million rupees each.
National Accountability Bureau (NAB) Additional Prosecutor General (APG) read the medical reports of Asif Ali Zardari, which were submitted during the hearing, upon Justice Athar Minallah directions.
According to the reports, the erstwhile president is suffering from diabetes and heart disease and needs to undergo angiography, whereas, angioplasty may also be required while putting the stents. Asif Zardari’s life is in danger and his treatment is not possible in jail, the report said.
The NAB told the court that two references regarding fake bank accounts in Park Lane and mega money laundering cases have been filed. The court remarked that it means the anti-graft watchdog does not further require custody of the suspect as references have already been lodged.