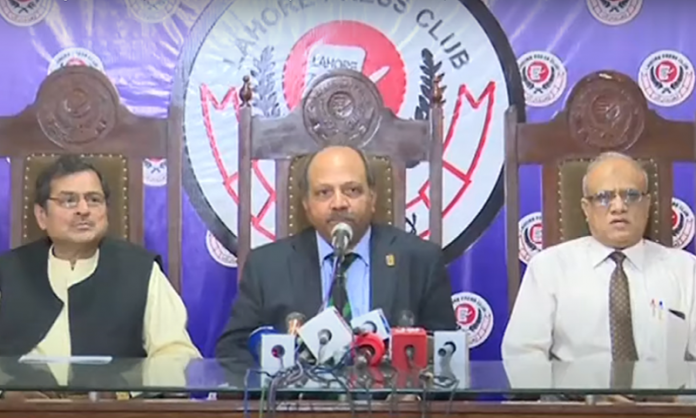 LAHORE: Doctors of the Pakistan Medical Association (PMA) on Thursday urged the government and state institutions — particularly the chief justice of Pakistan, who has taken a suo motu notice regarding measures taken to curb the pandemic — to review its recent decision taken in consultation with ulema to allow congregational prayers in mosques.
Stressing the importance of taking strict measures to curb the spread of the novel coronavirus, PMA President Dr Ashraf Nizami – who was speaking alongside other senior doctors from the body at a presser in Lahore – urged authorities “not to push the country into a test it is not prepared for”.
“The rule they have made that there should be a six feet distance between worshippers; practically it’s not possible. We appeal the government to review its decision and establish writ of the state.”
Pointing towards the restrictions in place in Islam’s holiest sites, Dr Nizami said:
“Our qibla is Kaaba and Masjid-i-Nabwi is most important for us. If there are rules being implemented there […] and our religious scholars have also said that Taraweeh and prayers should not be offered in mosques.
“Your (government’s) imprudent steps will not be good for us,” he said, calling upon the country’s leadership to exercise the “writ of the government”.
“The decisions made by governments of Saudi Arabia, Dubai, Turkey, Malaysia and Indonesia as Muslim countries should also be adopted by Pakistan.
“All of us want to pray and worship in Ramazan but we should not do anything that would, God forbid, lead to an increase in our troubles,” he said.
He pointed out that confirmed cases in Pakistan had already crossed the 10,000 mark even though the country’s testing capacity was limited.
“I don’t want to scare you, but I would like to inform you that the [cases] are not in thousands […] the number is much higher. It would sound weird to hear that the number is [more than] 100,000 but it is definitely not less.”
He clarified that the number was not “based on assumptions but on mathematics”. He pointed out that research had shown around 80 per cent of patients did not show symptoms. The government, he said, had not examined individuals without symptoms. “If they are tested, the number of cases will be much higher,” he claimed.
Dr Nizami called for the imposition of a “100pc lockdown policy”, saying that the recent relaxations had led to an increase in cases across the country. The lockdown, he said, should also include restrictions on religious gatherings.
“We have always said that ‘prevention is better than cure’. And in this case, it is a 1,000 times better to stay cautious.
“Remember: there is no cure for this virus. Even if Mr Trump, or anyone else, says they have found a cure, it is all chatter. There is no treatment for Covid-19,” he warned.
“We are not economic experts, but as medical professionals, we believe that if there is life, there is opportunity. To say that we’ll either die from the virus or from poverty is not right. This is a very negative trend.”
Yesterday, senior doctors, in a press conference in Karachi, had also urged the government to review its decision to allow prayer congregations as it would lead to an “exponential growth” in the number of infections.
Earlier this week, a letter was written by senior doctors to ulema and government urging them to review the decision.