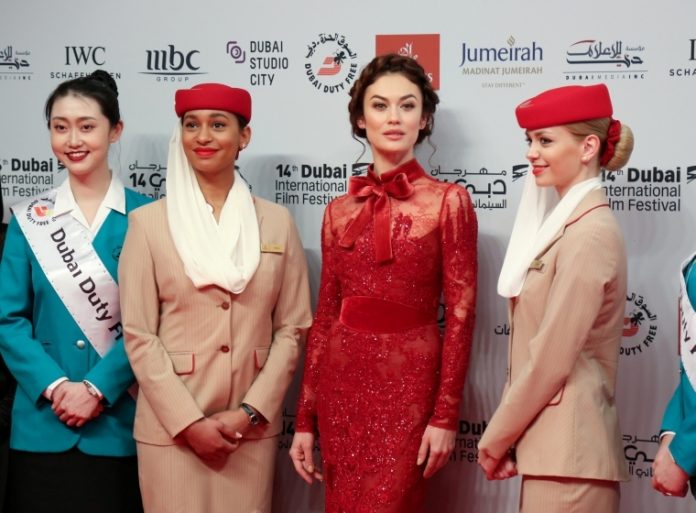 DUBAI: Dubai´s international film festival opened on Wednesday night, bringing together Britain´s Patrick Stewart, India´s Irrfan Khan and Egypt´s Wahid Hamed — cinema stars from different corners of the globe.
In a region rife with conflict which pushed the famed Marrakesh festival to take a one-year hiatus, dozens of stars, cinema lovers and social media influencers gathered for the 14th Dubai International Film Festival.
The event runs through December 13 and features 140 movies from 51 countries with a heavy focus on the Middle East and North Africa, from Iran to Syria, Lebanon, Israel and the Palestinian territories.
Walking the red carpet opening night were cinema royalty from around the world, including Cate Blanchett, Egyptian film and TV star Yusra and India´s Khann, of “Slumdog Millionaire” and “Life of Pi” fame.
The largest cheer was reserved for Stewart, who said he was looking forward to the screenings of regional films in particular.
“I´m not very familiar with Arabic film,” Stewart told journalists on the red carpet. “After this week, I will certainly know very, very much more.”
The festival opened with the Middle East premier of the Scott Cooper Western “Hostiles,” the story of a 19th century soldier forced to escort a dying Cheyenne chief and his family home starring Christian Bale and Rosamund Pike.
But the star attraction over the coming week is Syria´s “Last Men in Aleppo”, a documentary on the daily lives of the White Helmets — the volunteer rescue workers who have refused to leave their homeland despite a devastating war.
The film landed the Sundance Grand Jury Prize this year.
The festival also honours Egypt´s Hamed, the screenwriter behind the 2006 film adaptation of The Yaacoubian Building, with a lifetime achievement award, along with both Khann and Stewart.
Hamed, known as a pioneer of Arab cinema, has long history of battling censorship.
For over a decade, he fought for his political drama “Al-Baree” (“The Innocent”) to make it to the silver screen.
The film was finally released in 1997, and only after he had agreed to alter the ending of his tale, which chronicles the disillusionment of a peasant drafted into the Egyptian army.