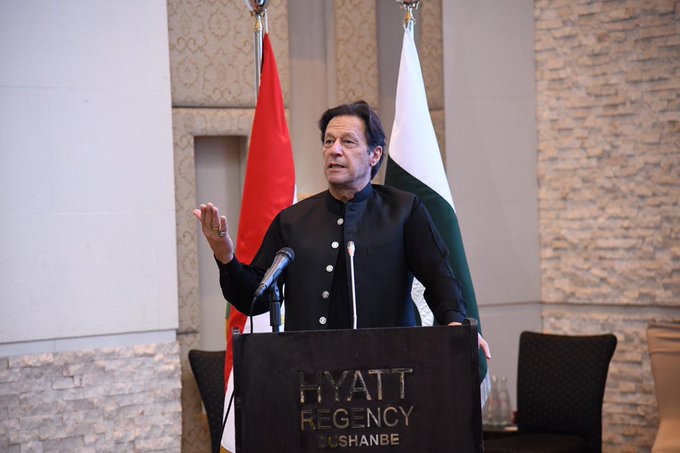 Prime Minister Imran Khan Thursday interrupted a poet who was criticising his policies after he addressed the Pakistan-Tajikistan Business Forum in the Tajik capital to attract foreign investment.

PM Imran Khan is currently in Tajikistan to attend the Shanghai Cooperation Organization (SCO) Council of Heads of State 2021 and is accompanied by a high-level delegation including the representatives of 67 companies from multiple sectors including textile, mineral, pharmaceutical, logistics and others.

The forum was organized by the Ministry of Commerce (MOC) and Trade Development Authority of Pakistan. More than 150 Tajik companies had attended the event.

During the Q&A session, a man started reciting poetry critical of the prime minister.

“I have a verse for you, [which goes like] Itne zaalim na bano [don’t be unjust]. Imran bhai, this is for you,” said the Pakistani man in the audience, when handed the microphone.

“You have become a prisoner now. You used to be great when you were [protesting] on the container. Right now, we aren’t sure what you’ve gotten yourself involved in,” said the man.

The man went on to recite part of the verse, “Zaalim na banoon, kuch toh murawwat…” before he was cut off.

At first, the state-run Pakistan Television cut off his poem and then, the prime minister also interrupted him.

“Please speak about matters related to business. We can make time for poetry later as well, Insha’Allah,” said the prime minister.

Addressing the Pakistan-Tajikistan Joint Business Forum, the prime minister had said that his government was already on the course of incentivizing and facilitating its own business sector through different measures.