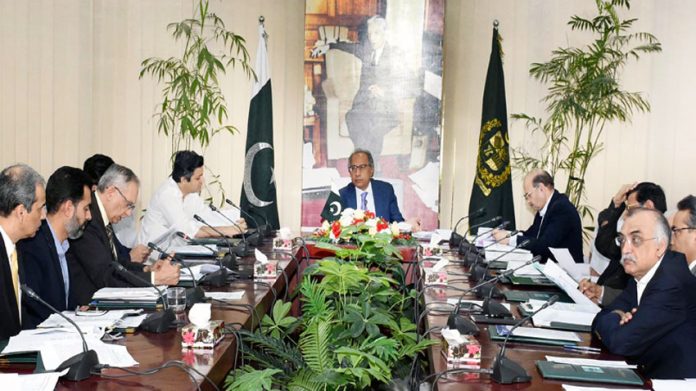 ISLAMABAD: Economic Coordination Committee of the Cabinet has approved separate proposals for simplification of tax regime for non-resident companies investing in the local debt market, revision of cess rate on tobacco for the year 2019-20 and payment of outstanding amount of 5.85 billion rupees as gas subsidy to the fertilizer industry.
Meeting of ECC was held in Islamabad today (Wednesday) with Advisor to the Prime Minister on Finance Dr Abdul Hafeez Shaikh in the chair.
The ECC was also briefed on the wheat situation in the country and it was pointed out that while prices were stable in most parts of the country, there were certain areas and places such as Karachi where the wheat and flour prices had escalated.
The ECC directed the Ministry of National Food Security and Research to sit down with all stakeholders and ensure that the situation does not get out of hands and supply of wheat and flour at regular prices is ensured.
The ECC also considered a proposal by the Ministry of Energy for application of quarterly adjustment notified on 1st July this year to the zero rated industrial consumers.
It also considered proposal that Financial Cost Surcharge, Neelum Jhelum Surcharge, taxes and positive fuel adjustments would not be part of billing to zero rated sector industrial consumers and would be part of subsidy claims to be picked by the government.
The Committee discussed the pros and cons of the proposal in view of its financial implications and asked the Finance Division to hold a meeting with the stakeholders, including the Power Division, Commerce Division and Industries & Production Division and resubmit the case to ECC with solid proposals.
The ECC also approved proposals submitted by the Ministry of Finance for simplification of tax regime for non-resident companies investing in the local debt market with a view to deepening the country’s capital markets, reducing the cost of debt for the government and increasing foreign exchange inflows and reserves.
The new tax regime as approved by the ECC would apply to the non-resident companies having no permanent presence in Pakistan.
The ECC also took up a proposal for extension and rehabilitation of gas network in the oil and gas producing districts of Khyber Pakhtunkhwa and referred the matter to the Development Working Party headed by the Secretary Petroleum for an appropriate decision.