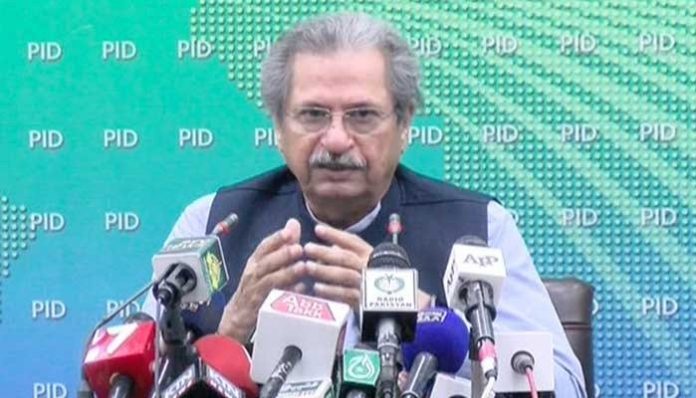 ISLAMABAD: Federal Minister for Education Shafqat Mahmood on Thursday said that all the educational institutions, including universities, will reopen from September 15 if the health situation of the country improved.
The minister said that the government will review its decision in the first week of September by monitoring the situation in the country by taking a look at the ‘health indicators’ and take a final decision in this regard.
Mahmood said that it had been decided to allow schools to call its administration staff before September 15 and announced that trainings will be conducted to ensure that SOPs are implemented.
He said that provinces will be responsible for ensuring SOPs that are followed, cautioning schools to follow the procedures laid out by the government. “It is my request to private schools, especially, that the SOPs that you will have to follow will be the ones made by the government,” he said.
The minister said that universities had recommended to the government that PhD students should be allowed, in a limited quantity, to universities. “How they decide to call students, we leave it up to the universities,” he said.
He touched upon the problems faced by students in some areas where there was a lack of internet facilities, saying that some students were unable to study properly due to it.
Mahmood said that educational institutions had advised the government to allow examinations to be held. “We have received suggestions to allow the holding of exams for medical students and university admission tests,” he said.
The minister announced that the government will relax some restrictions imposed on important exams and admission tests as well.
He said that the government was permitting universities also to admit students into hostels up to 30% capacity. However, Mahmood said that ‘health checks’ which included tests and temperature checks will be done strictly by universities.