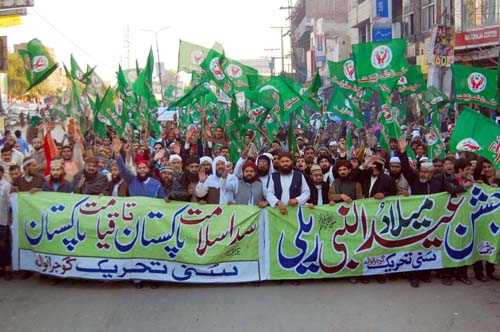 ISLAMABAD: Eid Milad-un-Nabbi, the birthday of Holy Prophet (Peace Be Upon Him) was celebrated across the country with traditional religious zeal and fervour on Friday.
The government and religious organizations, Milad committees and individuals had planned a number of activities, including Milad processions, seminars, conferences, ‘Mahafil’ and discussion programmes to celebrate the annual event.
The sacred day began with offering of special prayers in mosques for upholding and flourishing of Islam and the Islamic teachings, unity, solidarity, progress and welfare of the Muslim Ummah.
The event’s activities started with a 31-gun salute in the federal capital and 21-gun salutes in the provincial capitals. Numerous Eid Milad-un-Nabi processions were taken out across the country to celebrate the day.
Streets of all cities, roads, bazaars and shopping centres, government and private buildings were beautifully decorated with lighting, bunting and banners, showing special love and reverence for the Holy Prophet (Peace Be Upon Him).
Decorative gates were also erected at major roads and streets in all small and major towns of the country, while vendors had set up colourful stalls with unique collection of badges, stickers, flags and banners inscribed with religious slogans, to pay respect and reverence to the Holy Prophet (Peace Be Upon Him) across the country.
Federal and provincial governments had prepared security plans with coordination of law enforcement agencies to guard processions and gatherings held in connection with the day.
In Islamabad, more than 2,000 police personnel, including 300 traffic policemen, performed security duties, while special teams of Rangers, crime investigation department (CID) and special branch police also assisted them.
The main procession of the day started from Sector G-7 (Sitara Market) and culminated near the shrine of Hazrat Sakhi Mehmud at Aabpara Market. There was strict monitoring of the main procession while Close Circuit Television (CCTV) cameras had also been installed to ensure the security.
In Rawalpindi, around 3,500 policemen were deployed to ensure security of the processions. The main procession route, DAV College Chowk, Fowara Chowk, Raja Bazaar, Bansaa Wala Chowk and Buni Chowk were barricaded and no vehicular traffic was allowed from there. All the traffic was diverted to other routes. …APP