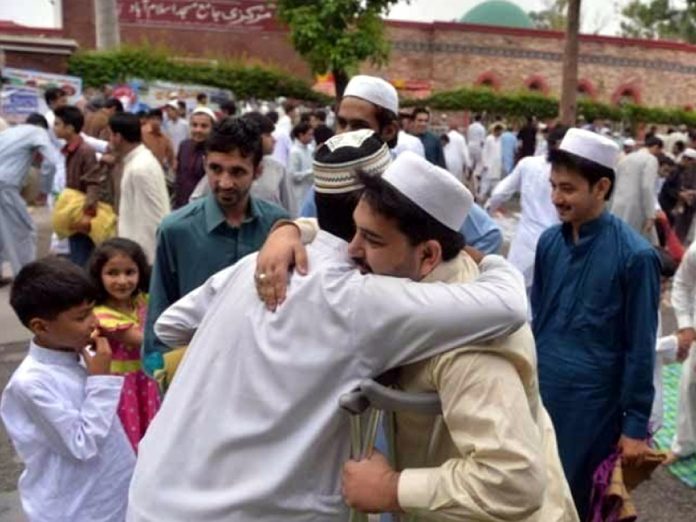 ISLAMABAD: Nation is celebrating Eid-ul-Fitr with great religious fervour and enthusiasm to mark the end of holy month of Ramazan on Wednesday.
The day began with special prayers in mosques for well-being of Muslim Ummah and progress, prosperity and security of the country.
Eid congregations were held at open places, mosques and Eidgahs in all major cities and towns. The Ulema in their sermons highlighted the significance and philosophy of Eidul Fitr.
In the federal capital, the main Eid congregation was held at Faisal Mosque where Federal Ministers, politicians and parliamentarians present in Islamabad, Muslim diplomats and notables joined thousands of faithful in prayers.
Stringent security measures have been taken to maintain peaceful atmosphere in the province on the occasion of Eidul Fitr.
Eidul Fitr means “festival of breaking the fast” and marks the end of the fasting month of Ramadan.
Traditionally, Eid is celebrated for three days as an official holiday in all Muslim-majority countries. However, the number of vacation days varies by country.
Like Ramadan, Eidul Fitr begins with the first sighting of the new moon, so usually Muslims have to wait until the night before Eid to verify its date. If the new moon is not visible, the month lasts 30 days.
Because it is a lunar occurrence, the date of Eid changes annually on the Gregorian calendar and varies from country to country depending on geographical location.
To declare the start of Eid, Muslim-majority countries depend on the testimonies of local moon sighters. The Judicial High Court then decides if Eid has arrived. When the sighting has been verified, Eid is declared on televisions, radio stations and at mosques.
Muslims across the world begin Eid celebrations by partaking in communal dawn prayers, followed by a short sermon. While in some countries the prayers take place in mosques or large halls, in many countries it is also held in the open.
People congratulate one another as they head home after Eid prayers. They spend the day visiting relatives and neighbours and accepting sweets as they move around from house to house. Children, dressed in new clothes, are offered gifts and money to celebrate the joyous occasion.
This is preceded by the giving of alms to the poor, or zakat, which is one of the five pillars of Islam.
It is common for the capitals of Muslim-majority countries to decorate their streets with festive lights and hold carnivals to commemorate the end of the holy month.
Each country has traditional desserts and sweets that are prepared before Eid or on the morning of the first day. These foods range from special biscuits and bread to cakes and puddings.
On the first day of Eid al-Fitr, voluntary fasting is not allowed as Muslims are encouraged to feast and celebrate the completion of a month of worship and abstinence from food.