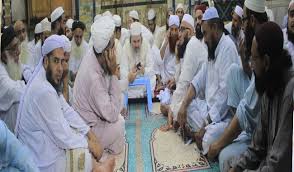 PESHAWAR: The unofficial Ruet-e-Hilal Committee of Masjid Qasim Ali Khan has announced on Thursday that the moon of Shawwal was sighted in several areas of Khyber Pakhtunkhwa and they will celebrate Eid on Friday (June 15).
A meeting of unofficial Ruet-e-Hilal Committee chaired by Mufti Shahabuddin Popalzai was held at Masjid Qasim Ali Khan on Thursday.
According to reports, the committee received at least 44 testimonies from across the province.
Mufti Popalzai claimed that 14 people personally appeared before the committee to record their testimonies.
The committee received testimonies from Timergara, Swabi, Landi Kotal, Lakki Marwat, Bajaur, Charsadda, Peshawar, Mardan and Bannu.
According to reports, the southern and central KP will celebrate Eid tomorrow, while the people of Swat will celebrate Eid with the rest of Pakistan on Saturday.
Meanwhile, Mufti Muneeb-ur-Rehman, the chairman of government’s Ruet-e-Hilal Committee said the crescent of Shawwal was not sighted anywhere in the country.
Pakistan will celebrate Eid-ul-Fitr on Saturday (June 16), announced Mufti Muneeb on Thursday night.
The meeting of Central Ruet-e-Hilal Committee was held in Karachi.
Addressing a press conference, Mufti Muneeb-ur-Rehman said the committee did not receive any credible testimony of moon-sighting from any part of the country.