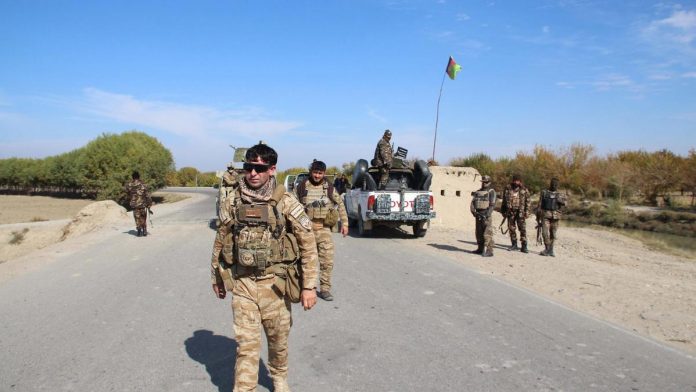 KUNDUZ: Dozens of Taliban fighters stormed three check-posts in pre-dawn raids in northern Afghanistan Tuesday, killing at least eight security personnel, in the latest attack on government forces ahead of expected peace talks.
It comes after authorities this week accused the Taliban of increasing attacks on Afghan forces at a time when both sides are preparing to start delayed negotiations.
The simultaneous raids on one army and two police checkpoints in Kunduz province led to fierce gunfights that lasted for hours, officials said.
Eight members of Afghan security forces were killed and seven more were wounded in the fighting, district head Nasruddin Saadi told foreign news agency.
Kunduz provincial governor spokesman Esmatullah Muradi confirmed the coordinated attack but said nine security personnel were killed in the night-time battle.
The Taliban have so far not commented.
Taliban fighters have repeatedly attacked security forces in and around Kunduz province. The city itself has briefly fallen twice to the insurgents in recent years.
Taliban fighters also raided an army check post in Balkh province and another in Ghazni province during the night, the defense ministry said, adding that several insurgents had been killed in ensuing clashes.
On Monday, the National Security Council said the Taliban had killed at least 291 Afghan security personnel over the past week, saying it was the “deadliest” week in the 19-year conflict.
President Ghani, in an address to the cabinet on Monday, said the violence unleashed by the Taliban was “running against the spirit of commitment for peace”.
Violence had dropped across much of Afghanistan since the Taliban announced a three-day ceasefire on May 24 to mark the Eid al-Fitr holiday, but officials now accuse the insurgents of stepping up attacks.
Ghani, however, has vowed to complete a Taliban prisoner release as agreed in a deal between the insurgents and Washington in February.
Afghan authorities have already freed about 3,000 Taliban inmates, and plan to further release 2,000 as stipulated in the deal as a condition for talks.
The deal between Washington and the Taliban has paved the way for withdrawing foreign troops from Afghanistan by the middle of 2021 and also begin peace talks. …Agencies