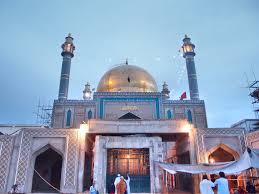 SEHWAN SHARIF: At least eight people Saturday died from heat during the 763rd urs celebrations of Hazrat Lal Shahbaz Qalandar.
Thousands of devotees from across the country are pouring into the small town of Sehwan to pay homage to the Sufi saint.
Devotees have to brace a severe heat wave as temperature in Sehwan has been recorded at 44 degrees.
At least five people were died of heatwave while three were drowned in a river while taking bath to beat the heat. Most of the victims were from Punjab
Additional police has been deployed to ensure that no untoward incident takes place during the urs celebrations.