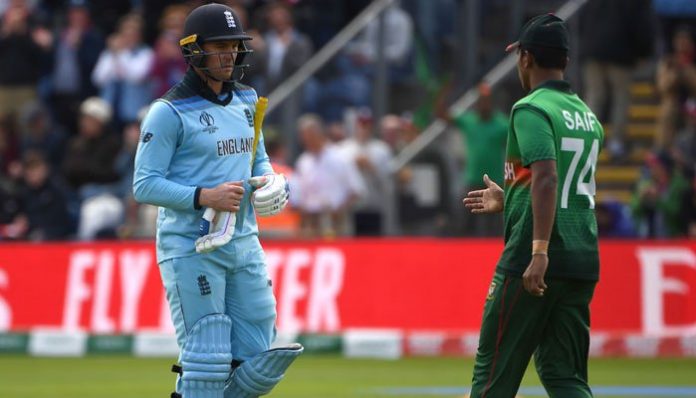 CARDIFF: Jason Roy made the highest individual score of the World Cup as his 153 runs powered England towards a huge total of 386 against Bangladesh in Cardiff on Saturday.
Sent in to bat by Bangladesh captain Mashrafe Mortaza on a green-tinged pitch, Roy and Jonny Bairstow (51) put on 128 for the first wicket. The in-form Roy, however, pressed on, reaching the landmark in 92 balls, including 12 fours and a six.
Roy completed his century in bizarre fashion when, running to the non-striker´s end as he completed what should have been a single to take him to 97, Mohammad Mithun at deep square leg misfielded and the ball went for four.
The Surrey batsman collided with umpire Joel Wilson and knocked him to the ground but neither he nor the Trinidad official were unhurt.
Roy carried on to surpass this tournament´s previous highest score, Rohit Sharma´s 122 not against South Africa at Southampton on Wednesday.
He was finally caught by Mashrafe off the bowling of Mehidy Hasan Miraz for 153, holing out after hitting three sixes in a row off the bowler.
Both Roy and Bairstow have come unstuck against spin in this tournament so it was no surprise when Bangladesh opened the bowling with left-arm spinner Shakib Al Hasan.
But on a green-tinged, if slow, pitch, England played him comfortably enough.
Bairstow fell soon after completing a 48-ball fifty, a leading edge off Mashrafe well caught by Mehidy in the covers to give the Bangladesh skipper his first wicket of this World Cup.
Joe Root scored 21 before he played on off the bowling of Mohammad Saifuddin.
Mehidy Hasan and Mohammad Saifuddin picked two wickets each while Mustafizur Rahman and Mashrafe Mortaza bagged one wicket respectively.– Agencies