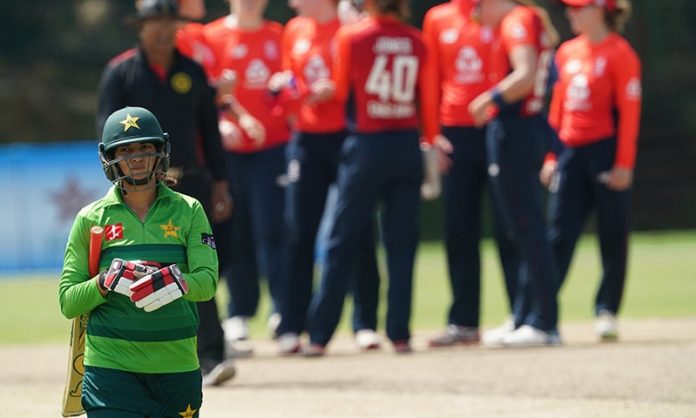 KUALA LUMPUR: Bismah Maroof’s gutsy half-century was in vain as England Women beat Pakistan Women by 29 runs in the first of the three T20Is at Kuala Lumpur on Tuesday, said a press release by the PCB.
The Pakistan captain scored a 58-ball 60, hitting five fours.
Pakistan lost both openers in the first five balls of the run chase as the scorecard read one for two at the end of the first over. The problems compounded when they lost two wickets in the last three balls of the Powerplay, which left them reeling at 47 for four.
Bismah, over the course of her 11th T2oI half-century, led the rearguard effort by knitting a 46-run partnership with Umaima Sohail, who hit two fours and a six in her 14-ball 21, while her 60-run stand with wicketkeeper-batter Sidra Nawaz (22 off 24) brought Pakistan closer to victory.
She was the last Pakistan wicket as the hosts were bowled out on 125 in 18.4 overs.
England’s Sophie Ecclestone shone with the ball taking three wickets for 21 runs, while the other notable performance came from Freya Davis, who took two wickets at the cost of 18 runs.
Reflecting on her innings and the match, Bismah Maroof said: “I was looking to keep the scoreboard ticking by targeting bad balls and rotating the strike. My target was to stay at the crease till the end.
“It was a batting-friendly wicket and we missed the trick by not constructing lengthy partnerships. We are doing well in bits and pieces but we are unable to make the most of the chances that we get.
“I am backing these girls to bounce back in the next match as this unit has put remarkable performances in the past. This match has given the group the belief that we can chase down targets. There were some lapses in the fielding department today and we will try to cut them in the next two matches.”
That England had scored an imposing 154 for four, after being put into bat, was largely due to a blistering 39-ball 53 by wicketkeeper-batter Amy Jones.
Over the course of her second half-century in the format, Jones, who struck 10 fours, provided a solid foundation. She knitted a 58-run partnership for the second-wicket with Tammy Beaumont (30 off 29) which helped England recover from an early dismissal of Danni Wyatt, who made run-a-ball six, in the fourth over.
Speaking about her innings, Amy Jones said: “It s not an easy pitch to score quickly on, and I think the opening few overs are probably the best time to bat.
“Pakistan were disciplined with the ball and they didn t make it easy so I think we did well to get up to 160, but we perhaps would have liked a few more.
“The wickets in Australia at the World Cup won t be too similar to this but the important skill is adapting and hopefully adapting to these wickets will stand us in good stead for the World Cup.”
The partnership was broken by 15-year-old debutant Aroob Shah. The leg-spinner accounted for Jones’ wicket in the 11th over and was the most-economical bowler from her side with 13 dot balls in four overs. She returned one for 21.
For her exploits with the bat, Jones was named player of the match.
Middle-order batters Natalie Sciver and Heather Knight made the most of the platform provided by Jones.
Sciver made an unbeaten 29-ball 34 – hitting a six and a four – while Knight facing five deliveries of the final over of the England innings cracked three fours on her way to 13 not out.
All-rounder Nida Dar was the successful bowler for Pakistan with two wickets for 30 runs in four overs.
The second T20I will be played on Thursday.
England Women 154-4, 20 overs (Amy Jones 53, Natalie Sciver 34 not out, Tammy Beaumont 30; Nida Dar 2-30)
Pakistan Women 125 all-out, 18.4 overs (Bismah Maroof 60, Sidra Nawaz 22, Umaima Sohail 21; Sophie Ecclestone 3-21, Natalie Sciver 2-12, Freya Davis 2-18)
Result: England Women won by 29 runs