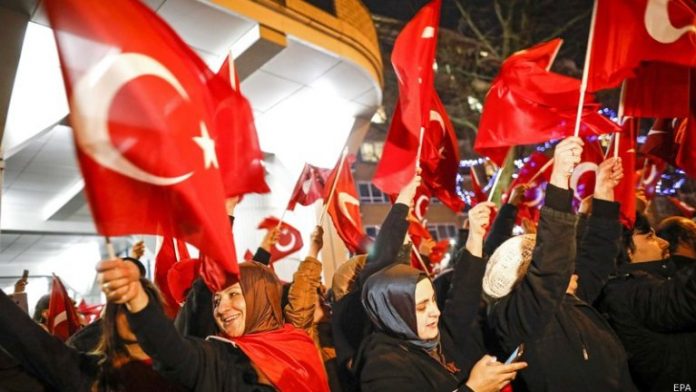 ISTANBUL: Turks voted on Sunday in presidential and parliamentary elections that pose the biggest ballot box challenge to Tayyip Erdogan and his Islamist-rooted AK Party since they swept to power more than a decade and a half ago.
The vote will also usher in a powerful new executive presidency long sought by Erdogan and backed by a small majority of Turks in a 2017 referendum. Critics say it will further erode democracy in the NATO member state and entrench one-man rule.
“This stability must continue and that can happen with Erdogan so I voted for him,” said janitor Mehmet Yildirim, 48, in Istanbul. “I also think that with Erdogan, we stand stronger against the West.”
More than 56 million people were registered to vote at 180,000 ballot boxes across Turkey. Voting began at 8 a.m. (0500 GMT) and will end at 5 p.m. (1400 GMT).
President Erdogan, the most popular but also divisive leader in modern Turkish history, moved the elections forward from November 2019, arguing the new powers would better enable him to tackle the nation’s mounting economic problems – the lira has lost 20 percent against the dollar this year – and deal with Kurdish rebels in southeast Turkey and in neighboring Iraq and Syria.
But he reckoned without Muharrem Ince, the presidential candidate of the secularist Republican People’s Party (CHP), whose feisty performance at campaign rallies has galvanized Turkey’s long-demoralized and divided opposition.
Addressing a rally in Istanbul on Saturday attended by hundreds of thousands of people, Ince promised to reverse what he and opposition parties see as a swing toward authoritarian rule under Erdogan in the country of 81 million people.
“If Erdogan wins, your phones will continue to be listened to … Fear will continue to reign … If Ince wins, the courts will be independent,” said Ince, adding he would lift Turkey’s state of emergency within 48 hours of being elected.
Opposition parties and NGOs have said they were deploying half a million monitors at ballot boxes to prevent fraud. They argue changes in the election law and allegations of fraud in the 2017 referendum raise fears about the fairness of the vote.
The leader of the main opposition CHP party, Kemal Kilicdaroglu, said after voting in Ankara that his party had received complaints of voting irregularities, particularly in the mainly Kurdish southeast.
“Every shadow cast over the election is a blow to our democracy. Hence it is my duty to warn all civil servants again: Please everybody do their duty,” he said.
There was no immediate response to the allegations from the government but after voting in the southeast’s Gaziantep city, Justice Minister Abdulhamit Gul said there were no reports of any problems in voting, state-run Anadolu news agency reported.
“Everyone is voting peacefully,” he told reporters. “Everyone will respect this. The election is being conducted in the presence of the judiciary and officials. The elections are being held in a nice atmosphere.”
Turkey has been under emergency rule – which restricts some personal freedoms and allows the government to bypass parliament with emergency decrees – for nearly two years following an abortive military coup in July 2016.
Erdogan blamed the coup on his former ally, U.S.-based Muslim cleric Fethullah Gulen, and has waged a sweeping crackdown on the preacher’s followers in Turkey. The United Nations say about 160,000 people have been detained and nearly as many more, including teachers, judges and soldiers, sacked.
The president’s critics, including the European Union which Turkey still nominally aspires to join, say Erdogan has used the crackdown to stifle dissent. Few newspapers or other media openly criticize the government and he has received far more election coverage than other presidential candidates.
“This is no longer a Turkey we want. Rights are violated, democracy is in terrible shape,” said health sector worker Sema, 50, after voting in Istanbul.
She and others in the city said they voted for the pro-Kurdish Peoples’ Democratic Party (HDP) so that it exceeds the 10 percent threshold of votes needed to enter parliament. If it does so, it will be harder for the AKP to get a majority.
Erdogan, who defends his tough measures as essential for national security, told his supporters at rallies on Saturday that if re-elected he would press ahead with more of the big infrastructure projects that have helped turn Turkey into one of the world’s fastest-growing economies during his time in office.
Polls show Erdogan falling short of a first-round victory in the presidential race but he would be expected to win a run-off on July 8, while his AK Party could lose its parliamentary majority, possibly heralding increased tensions between president and parliament.
Other presidential candidates include the HDP’s Selahattin Demirtas, who is now in jail on terrorism-related charges that he denies.
In a final appeal for votes in a video clip from his high security prison, Demirtas said: “If the HDP fails to get into parliament, all Turkey will lose. Backing the HDP means supporting democracy.” – Reuters