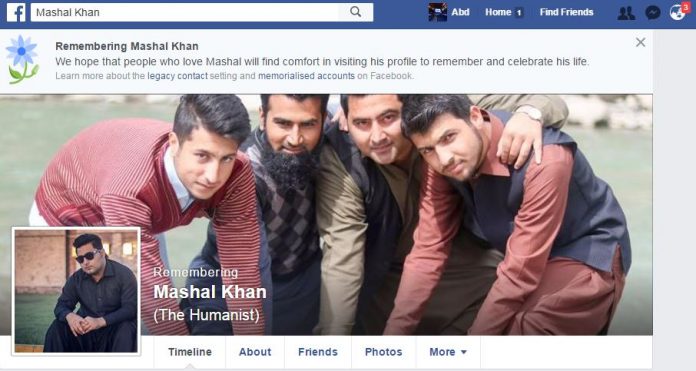 ISLAMABAD: Facebook has memorialised profile of slain student of Abdul Wali Khan University in Mardan this month after he was lynched by a charged mob over his progressive views.
The social networking giant authorised “We hope that people who love Mashal Khan will find comfort in visiting his profile to remember and celebrate his life,” on his account.
Prime Minister Nawaz Sharif among other lawmakers condemned the attack on the student of mass communication.
Chairman of Pakistan Tehreek-e-Insaf, Imran Khan reprimanded the federal government over the incident by calling an end to the ‘rule of jungle’.
Top official of provincial police has said that no evidence was found against late Mashal to back what the culprits took offence of. Chief Minister of Khyber Pakhtunkhwa, Pervez Khattak ordered a probe of the attack last week.