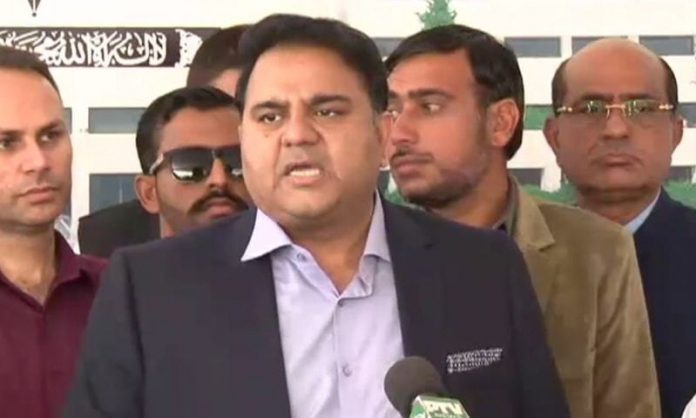 ISLAMABAD: The visibly irked Chief Justice Mian Saqib Nisar has summoned federal ministers Fawad Chaudhry and Azam Swati in IG Islamabad transfer case to appear before the court today.
The CJP was heading a three-member bench which was hearing the suo motu notice of transfer of top Islamabad cop in a controversial manner earlier this week, reportedly after Azam Swati’s complaint to the prime minister.
The chief justice remarked that the statement of the minister was ‘irresponsible’ and we could not imagine of such thing. The affected family was also ordered to be present when the hearing resume.
After making controversial statements about apex court’s verdict on suo motu notice on transfer of Islamabad Inspector General of Police (IGP) Jan Mohammad, federal minister for information and broadcasting Fawad Chaudhry informed the Supreme Court of Pakistan (SC) that he ‘lacks courage’ to make statement against judiciary.
He made these remarks after SC took strong exception to ‘irresponsible’ statement of information minister Fawad Chaudhry ridiculing the court over suspension of verbal orders of PM.
“Under what capacity, you are issuing taunting statements. Let us telecast the video of your remarks in the court”, remarked Chief Justice of Pakistan (CJP).
CJP also invited federal minister to read with him section-4 of the Constitution.
Talking to media after appearing in the court, Chaudhry claimed that he addressed bureaucracy in his yesterday’s statement. He reiterated that Prime Minister (PM) Imran Khan is chief executive of the country and that his policies will be implemented.
Fawad Ch s statement
Irked by suspension of orders of Islamabad IG, Fawad Chaudhry inquired that what the point of holding general elections was if prime minister couldn’t even suspend an IG.
The firebrand minister further added that it is unacceptable for the incumbent govt that bureaucracy runs state-affairs.