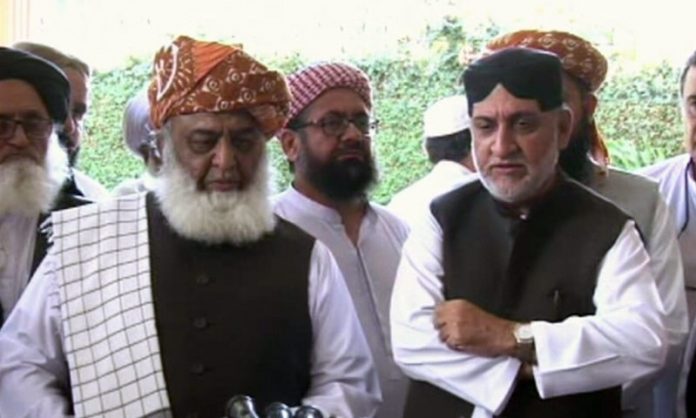 ISLAMABAD: Jamiat Ulema-e-Islam (JUI-F) leader Maulana Fazalur Rehman has said that if any attempt is made to change the 18th Amendment or NFC Award, it will face resistance at all levels. He also said that the option of having a vote of no confidence against PM Imran Khan is still on the table.
Holding a press conference with Balochistan National Party (BNP) leader Sardar Akhtar Mengal in Islamabad, the JUI-F chief said that only a truly elected parliament and National Assembly can take the country out of this crisis.
Reacting to the cut in NFC award by the federal government, he said that the share of provinces is fixed and any cuts would not be accepted. Attempts to make changes in the 18th Amendment or NFC Award will be resisted at all levels, he added.
Regarding the coronavirus, Fazalur Rehman said that it is a global pandemic and urgent measures are needed to control it but facilities in the country’s hospitals are next to none.
The JUI Chief said that work on all important projects included in the Pak-China Economic Corridor (CPEC) should be continued. He said that Balochistan had been ignored in the CPEC initiative, the APC demands giving Balochistan its due share in the project and condemns the government’s negligence in stopping locust attacks in the province.
He demanded that fake domiciles of Balochistan should be revoked after due verification and the powers of the Senate should be increased. He also remarked that he considers PTI and Balochistan Awami Party(BAP) to be the same entity.
In reply to a question regarding no confidence motion against the PM, he said that it was still an option and could be used if the circumstances demand it.
On this occasion, Sardar Akhtar Mengal said that if the PTI government manages to solve the problems of Balochistan, the entire province will join PTI, let alone BNP.
He said that we are going to sit on the independent benches and will continue to express our concerns to the government. He quashed the notion of rejoining the government and said that there was no turning back.
The Balochistan National Party chief said that secession from the government was a decision of the party’s central executive committee, not of an individual.