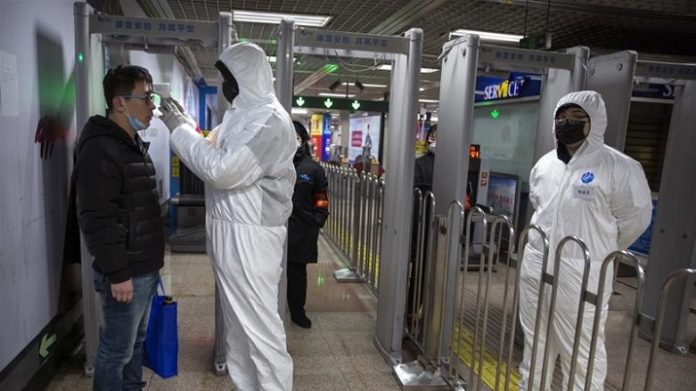 BEIJING: China reported its highest daily number of new coronavirus cases in months on Sunday, triggering fears of a second wave of infections as more European countries prepare to reopen their borders.
The shock resurgence in domestic infections has rattled China, where the disease emerged late last year but had largely been tamed through severe restrictions on movement that were later emulated across the globe.
It also gives a bleak insight into the difficulties the world will face in conquering COVID-19, coming as many European countries prepare to welcome visitors from elsewhere on the continent starting Monday.
Adding to the concern, Italy is fighting new outbreaks of its own, Iran and India have reported worrying increases in deaths and infections and the pandemic is gathering pace in Latin America.
Beijing has carried out mass testing after 36 of China s 57 new cases on Sunday were linked to a wholesale food market in the capital.
The city has raced to quash the new outbreak, issuing travel warnings, closing the market, deploying paramilitary police and putting nearby housing estates under lockdown.
More than 10,000 people have already been tested in the area, with another eight cases diagnosed on Sunday.
“I went to Xinfadi market, so I want to confirm that I am not infected,” a 32-year-old woman surnamed Guo said as she queued at a stadium for a test.
The Middle East s hardest-hit country, Iran, reported its own grim uptick on Sunday, recording more than 100 new virus deaths in a single day for the first time in two months.
And there have been two new outbreaks in Rome, with 109 infections including five deaths diagnosed at a hospital and 15 cases detected at a building inhabited by squatters.
“It means the virus hasn t lost its infectiousness, it isn t weakening… we shouldn t let down our guard,” World Health Organization deputy director Ranieri Guerra told Italian journalists.
“Such micro-outbreaks were inevitable, but they are limited in time and space. And today we have the tools to intercept them and confine them.”
More than 430,000 people worldwide have died from the respiratory illness, nearly halfway through a year in which countless lives have been upended and the global economy ravaged.
The pandemic is now spreading most rapidly in Latin America, threatening healthcare systems and sparking political turmoil.
Brazil now has the second-highest number of virus deaths after the United States, and the Chilean health minister resigned on the weekend amid a furor over the country s true number of fatalities.
In the US, more than a dozen states — including populous Texas and Florida — have in recent days reported their highest-ever daily case totals.
The rise comes as huge anti-racism protests rage across America and the world, with thousands stretching a human chain across Berlin on Sunday — while keeping a safe distance.
Meanwhile, President Vladimir Putin said Sunday that Russia had been more successful at handling the coronavirus than the US.
“We are exiting the coronavirus situation steadily with minimal losses, God willing,” he said in a televised interview. “In the States it isn t happening that way.”
More than 1,000 new infections are being recorded every day in India s capital, exposing a dire shortage of hospital beds.
“They don t care whether we live or die,” said Kashish Jain, whose father died from coronavirus in the back of an ambulance as his family raced around Delhi, pleading with hospitals to take him.
Hospitals in neighboring Pakistan are also turning patients away, with the government warning the country s cases could peak at more than a million by the end of next month.
The crisis has also led to immunization programs being suspended, and polio has been detected in areas of Afghanistan previously declared free of the life-threatening disease.
The news has been better in Europe, which has mostly seen caseloads steadily fall in recent months.
Germany, Belgium, France and Greece will open their borders to EU countries from Monday, with Austria to follow the next day.
Spain said it will reopen its borders to EU countries — except for Portugal — on June 21.
In a speech Sunday, President Emmanuel Macron said that France had marked its first victory in the fight against the pandemic, although he warned the battle is not over.
From Monday, France will go into a “green zone” of a lower state of alert starting Monday, meaning cafes and restaurants can open in full, instead of just the terraces.
In another joyful return to semi-normality, football superstar Lionel Messi took to the pitch again in Spain as Barcelona resumed their La Liga title challenge and mauled Real Mallorca 4-0 in an empty stadium on Saturday. …Agencies