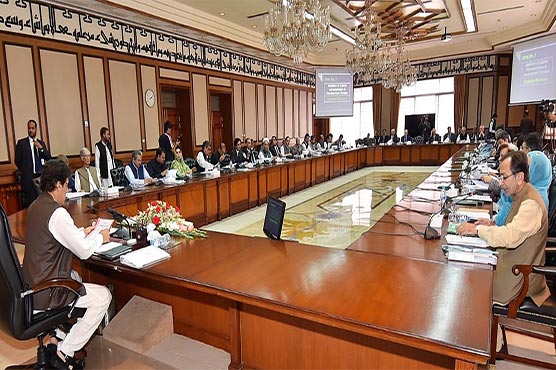 ISLAMABAD: Federal Cabinet has deliberated on various suggestions to remove obstacles to provide maximum relief to people as envisioned by Prime Minister Imran Khan.
Briefing media on cabinet meeting in Islamabad this afternoon, Special Assistant to Prime Minister on Information and Broadcasting Dr Firdous Ashiq Awan said the meeting took stock of fifteen month performance of the government.
It also considered the relief measures to public, public interest legislation and various initiatives of the government including subsidy in prices of gas and electricity.
Dr Firdous Ashiq Awan said Prime Minister took detailed briefing from Ministry of Water and Power and Ministry of Oil and gas. The Prime Minister was informed that how circular debt was managed to bring it down to 12 billion rupees.
The cabinet was also informed that consumers using less than 300 units of electricity have been given a subsidy of 242 billion rupees. It was informed that industries have been given a subsidy of 29 billion rupees.
Ministry of Oil and Gas in its briefing told the cabinet that it inherited a loss of 181 billion rupees which was managed. The briefing said a subsidy of 10 billion rupees was given to farmers while a sum of 30 billion rupees have been allocated for next year in subsidy.
The Prime Minister directed the Ministry of Oil and Gas to ensure provision of uninterrupted gas supply to domestic consumers.
He directed to bring reforms in Sui Southern and Sui Northern Gas companies with the introduction of automation. A mechanism should also be developed for billing so that in winter months the consumers are not burdened with heavy gas bills.
The cabinet expressed reservations on the issuance of Sukkuk Bonds. The Prime Minister directed the Finance Ministry to review the process and present it again in the next meeting.
The Prime Minister directed to equip hospitals and health facilities in the federal area with the latest equipment and facilities.
Imran Khan directed the Law Ministry to identify the cases which relate to sugar, flour and other commodities associations that have taken relief from the courts at the expense of public interest.
A committee under Dr Ishrat Hussain was set up to bring a policy on food laws in consultation with the provinces.
The cabinet offered Fateha on sad demise of hero of 1971 war Colonel Suleiman.