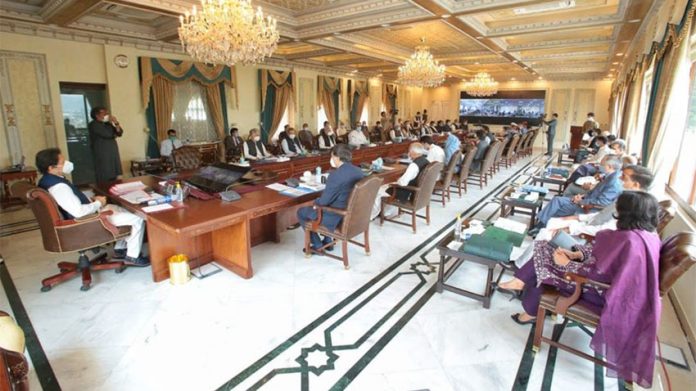 ISLAMABAD: Federal Minister for Information Shibli Faraz on Tuesday said that the federal cabinet has expressed its concern over the rise in flour prices in the country and directed the Punjab government to release 900,000 tonnes of wheat to stabilize prices.
Giving a briefing on the cabinet meeting chaired by Prime Minister Imran Khan today, Shibli Faraz said that efforts were also underway to take action against wheat smuggling to maintain flour prices at a lower level.
He said that the cabinet also discussed a mechanism to set sugar prices and it was decided that they would be determined after taking inputs on expenditure incurred by sugarcane growers.
“A system to determine sugar prices will be improved within the next three months,” he said adding that it would also improve sugar pricing and bring transparency in the matter.
He further said that the cabinet lauded education ministry over its efforts to introduce uniform syllabus policy across the country.
“Establishment of a teaching school in Islamabad was also approved by the cabinet,” the information minister said.
He said that the education ministry was in touch with the schools association and a final decision to reopen them would be made after consultation with schools’ association and parents.
Shibli Faraz said that the prime minister also vowed to bring an improvement in the healthcare system of the country during the cabinet meeting. “We currently have more than 4,000 ventilators in the country,” he said.
We have also approved four designs for the production of locally-made ventilators, he said adding that all of them are in the production phase.
The federal minister further said that they would soon overcome coronavirus pandemic in the country and it was due to their efforts that no mismanagement was witnessed despite a rise in COVID-19 cases.
“This uncertain situation will last until a cure is found against the infection,” he said adding three medicines are prescribed to lessen virus effect in some cases but it is not advertised to avoid a hike in their prices.
There are currently 129 coronavirus testing labs in the country, Shibli Faraz said.
He further lamented that those who are calling for strict lockdown country-wide have their assets stashed abroad.