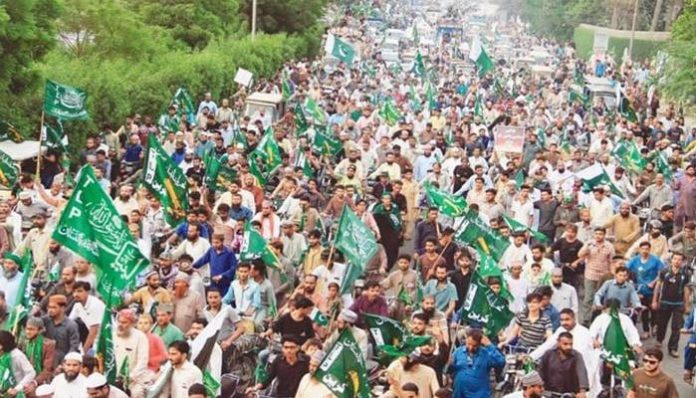 The federal cabinet is expected to discuss a set of demands from the banned Tehreek-i-Labbaik Pakistan tonight or early Wednesday as the outfit threatens to resume its long march on Islamabad.

The TLP had presented three demands, including one to expel the French ambassador to Pakistan, to Federal Interior Minister Sheikh Rasheed Ahmed, who held talks with its incarcerated chief Saad Rizvi on Sunday.

Mufti Umair Al-Azhari, a member of the TLP negotiation committee, claimed Rasheed assured them that he would place their demands about the French ambassador’s expulsion before the federal cabinet on Tuesday night and update the TLP about the response.

Al-Azhari says if the government does not deliver on its promise to expel the ambassador, the TLP would go back to its long march on Islamabad on Wednesday morning.

The TLP leaders had earlier said they would resume the protest on Tuesday evening.

According to Al-Azhari they were not ready to soften on their key demand to expel the ambassador.

“Our other points have secondary importance. Sheikh Rasheed and other influential ministers on the government negotiation team are with us that Tehreek-i-Labbaik Pakistan is a political party with a vote bank and the ban against it should be lifted,” he said.

The TLP protesters have been encamped at Muridke since Sunday after leaving Lahore amid clashes with police.

Rasheed had announced on Sunday after talks with the TLP that the protesters would not head to Islamabad until Tuesday though they would continue a sit-in at Muridke.

After the announcement, the protesters occupied GT Road, blocking the flow of traffic between Lahore and Gujranwala.

“They have opened one track,” Rasheed told the press conference on Monday.

Although Rasheed called the talks conducive, in the past he has ruled out the possibility of sending back the French ambassador, saying it would harm Pakistan’s diplomatic and trade relations with the European Union.