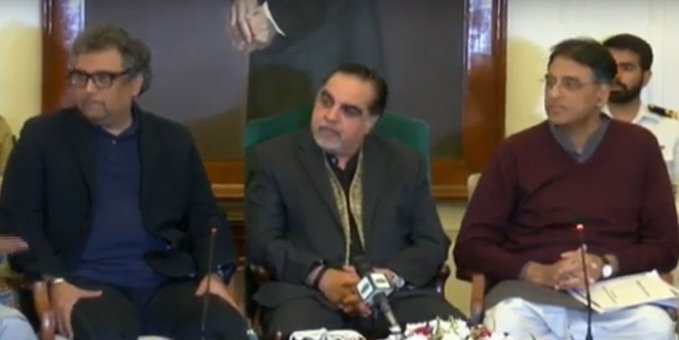 KARACHI: Federal Minister for Planning and Development Asad Umar Wednesday said Islamabad has issued funds for the mega projects of Karachi.
The federal minister held a press conference along with Sindh Governor Imran Ismail and said Prime Minister Imran Khan reiterates that he wants to do something for Karachi.
Asad Umar said Karachi Mayor Waseem Akhtar was present in Karachi Transformation Committee (KTC) meeting and did not express any reservation. Waseem Akhrtar could have done work faster if he had the authority, he said.
The Pakistan Tehreek-e-Insaf (PTI) leader commented that Sindh’s local government system is non-functional and against the constitution, and the federal government is still working with it despite that.
Pakistan Peoples Party (PPP) is in trouble at the moment and it has lost support at grass-root level, he said.
Asad Umar said the development projects of Karachi were analyzed and important decisions were made in a session a few weeks ago. Sindh Infrastructure Development Company Limited (SIDCL) is working quickly and many projects of the metropolis will be completed shortly, he added.
Asad Umar said Green Line projects will be sped up and PM Imran Khan will soon inaugurate the undertakings after visiting Karachi. K-IV project is government’s priority and it is important for Karachi as the city is facing shortage of water, he said.