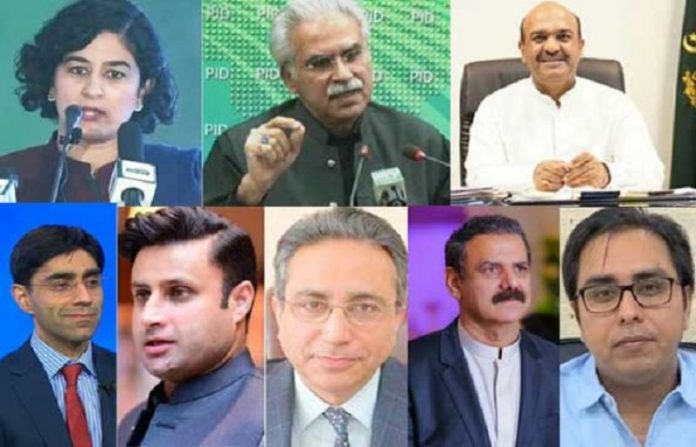 ISLAMABAD: The federal government of Pakistan has released asset details of Prime Minister’s Advisors and Special Assistants. Notably, five Special Assistants hold dual citizenship.
According to details released by the Cabinet Division, Tania Aidrus, Special Assistant to PM for Digital Pakistan, holds Canadian and Singaporean citizenship. Special Assistant for Petroleum Nadeem Babar is a US citizen with assets worth Rs 2.75 billion.
Special Assistant Parliamentary Coordination Nadeem Afzal Chan also holds Canadian citizenship while Shahbaz Gill is an American green card holder.
Special Assistant for overseas Pakistanis Zulfi Bukhari has permanent British citizenship and owns over 1,300 kanals of land in Pakistan including plots of 34 kanals in Islamabad. He also owns property worth GBP 4.85 million in London, GBP 1.75 million in overseas banks and shares of five companies abroad.
Zulfi Bukhari’s wife owns GBP 500,000 worth of gold and has Rs 2.4 million in various bank accounts in Pakistan.
Chairman CPEC Authority and Special Assistant to PM Asim Saleem Bajwa’s assets are worth more than Rs 161 million. Special Assistant Shahzad Akbar’s assets are worth more than Rs 72.3 million.
Special Assistant for Political Communication Shahbaz Gill owns assets worth Rs. 118.5 million and owes Rs 24.2 million. His current assets are worth Rs 94.4 million including a plot and farmhouse in Pakistan and another house abroad.
According to the Cabinet Division, none of the five Advisors of the Prime Minister have dual citizenship. Climate change adviser Malik Amin Aslam has invested Rs 5 million in the name of his wife in the form of shares and three vehicles worth Rs 92 lakh in the name of his wife. He owns agricultural equipment worth Rs 100,000 and furniture worth Rs 150,000.
Malik Amin Aslam has also declared a bank balance of Rs 14.7 million and has Rs1.075 in his wife’s name. He is also the owner of 15 inherited properties.
Special Health Assistant Zafar Mirza owns Rs 57 million, with a house worth Rs 20 million and plots worth Rs 30 million. His wife also owns jewelry worth Rs 2 million.
Special Assistant for Youth Affairs Usman Dar has assets worth Rs 60 million but he has not disclosed the value of his agricultural land and business in Sialkot.