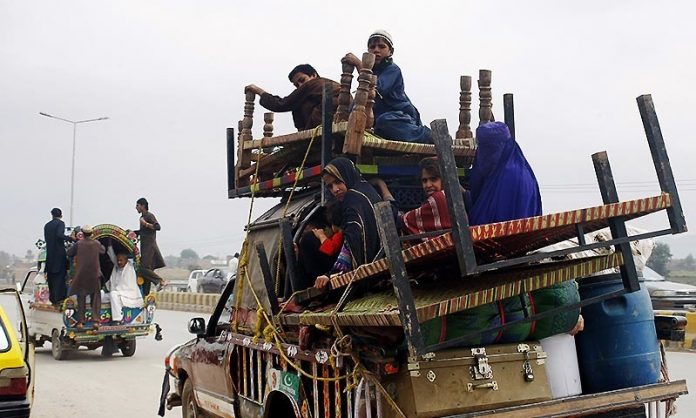 PESHAWAR: Caretaker Chief Minister of Khyber Pakhtunkhwa Justice (retd) Dost Muhammad Khan and caretaker Federal Minister for Information, Law and Parliamentary Affairs Syed Ali Zafar Wednesday agreed to the overall rehabilitation and reconstruction of newly merged districts of erstwhile FATA into Khyber Pakhtunkhwa.
They also agreed to install an efficient governance structure, giving quick relief to the people of Federally Administered Tribal Areas (FATA) and more importantly bringing them into the national stream.
The minister briefed the chief minister on the quick measures, transfer of resources from the federal government to Khyber Pakhtunkhwa, legal irritants, constitutional position, proposed exemption of FATA from federal and provincial taxes and collective responsibility for the infrastructure development in the newly merged districts.
The federal government would be recommended certain incentives, relief and expeditious transfer of resources for the overall recovery plan for rehabilitation and reconstruction of the newly merged districts, he assured.
He assured that the federal and the provincial governments were on the same page for removing the legal lacunas and irritants that might obstruct smooth transition of mainstreaming the tribal people.
The chief minister said his government took a number of decisions to discourage unnecessary use of resources.
He said the tribal people suffered heavily and the government had to move for quick relief to win them back. His government had already started working on preparing a plan for the infrastructure development and more importantly the quick rehabilitation of tribal people.
He had already set up a task force, which was working round the clock to remove lacunas in the law, making it compatible with the ground realities in tribal areas.
The chief minister said the government was making all out efforts to extend efficient services to the tribal areas and ensure their accessibility to the people. The extension of the jurisdiction of provincial offices to the new districts and giving proper training to the officers to be posted there have also been planned.
He stressed that no lacuna should be left as the same might be exploited by the miscreants. Mainstreaming the tribals should be the most focused area, he added.
The two sides agreed on continuation of the Riwaj system, besides extension of legal procedures, along with Lungi and provision of monthly stipend to Ulema. The rehabilitation and the recovery plan should take into account the interest of all segments of the society, they added.
The abrupt removal of system already in vogue could disturb the situation in the region and might also overburden the legal course, they observed.