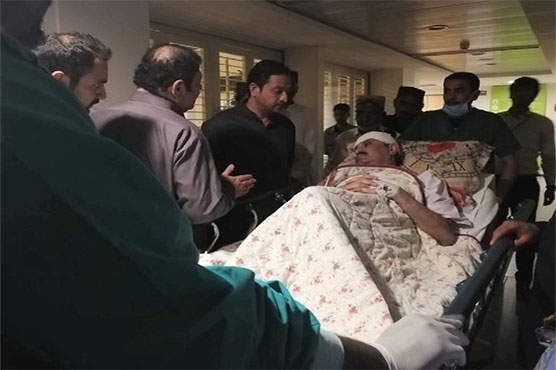 KARACHI: Federal Minister for Narcotics Control and former chief minister Sindh Ali Muhammad Mahar was injured by unknown armed men, who allegedly attempted to force their way into his house in Karachi’s Gizri area late on Monday.
As per details, the Federal Minister was left with head injuries as he was hit by the butt of the gun when he attempted to stop the armed men who broke into his home and asking about his servant namely Yasin.
According to the senior superintendent of police (SSP) for South, Mahar was shifted to a local hospital for medical attention.
Mahar, the former chief minister and a leader associated with the Grand Democratic Alliance (GDA), was safe and his wounds are not life-threatening, the SSP added.
Talking to media out side the hospital, Mhar’s lawyer said that it’s premature to say anything about the incident , adding that let the police probe the incident.
An incident of similar nature had taken place a day earlier when few men, came by rickshaws and motorcycles, approached him and got into an argument, said advocate Javed Mir.
Sindh Assembly (MPA) Haleem Adil Sheikh, spoke to the media outside hospital, saying: “The federal minister and a former chief minister is not safe either,” adding that CM Sindh never speaks of the worsening law and order situation in the province.
He urged the authorities to investigate the incident from all angles and the arrest of all those involved.
Muhammad Shaharyar Khan Mahar, another MPA, confirmed that the incident seemed to be an attempted robbery.
PTI leader Khurram Sher Zaman said Mahar would be kept in the hospital overnight and that the “provincial government should, at least, improve the law and order situation”.
Investigation is under way following the incident and police were collecting evidence regarding the incident.