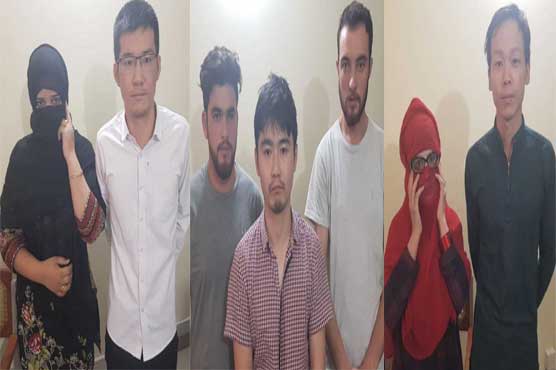 ISLAMABAD: The Federal Investigation Agency (FIA) on Tuesday arrested seven individuals for their alleged involvement in orchestrating fake marriages between Chinese men and Pakistani women and later coercing the latter into prostitution or exploiting them for the organ trade.
Out of the seven people taken into custody, three — including the gang’s alleged leader, Song Chuaoyang — are Chinese nationals.
One of the main accused in the case, Sajid, was identified by the FIA as the facilitator of the gang, while Rafique Hussain was described as the group’s translator and manager.
The raid — which was conducted under the supervision of FIA Anti-Human Trafficking Cell Rawalpindi’s Deputy Director Kamran Ali — took place after two women, Tayyaba Gul and Beenish Rasheed, appeared before the director general of FIA to tip the agency off regarding the gang’s activities.
The other four people picked up by the FIA were Guyong Da, Saima Mustafa, Fusing Bu and Saba Jahangir. According to the FIA, the Chinese men pretended to be Muslim and carried fake conversion certificates.
The agency believes that the women who married these men were later forced into prostitution and exploited for the illegal organ trade. According to the agency, more such arrests will take place in connection with the case and further investigations are underway.
The arrested individuals have been nominated in FIA enquiry number 352/19.
This is not the first such case to come to light. On Monday, the FIA’s Lahore wing had arrested eight Chinese nationals from Lahore on suspicions of being involved in human trafficking. The first information report against the suspects had been registered in Faisalabad.
Today, the suspects were moved to Faisalabad to be presented before a district magistrate, who will be petitioned for their physical remand.
The FIA has said that the arrested Chinese men had formed connections with Pakistani individuals who aided them in marrying Pakistani women, who were later forced into prostitution.
Earlier this year, a Chinese national was apprehended at the Islamabad International Airport for allegedly trafficking a Pakistani woman who claims to have been ‘sold’ by her parents.
The alleged trafficker was operating a marriage bureau in Islamabad’s F-7/1. He was stopped from boarding Air China flight CA-946 after he approached the briefing counter with a woman.