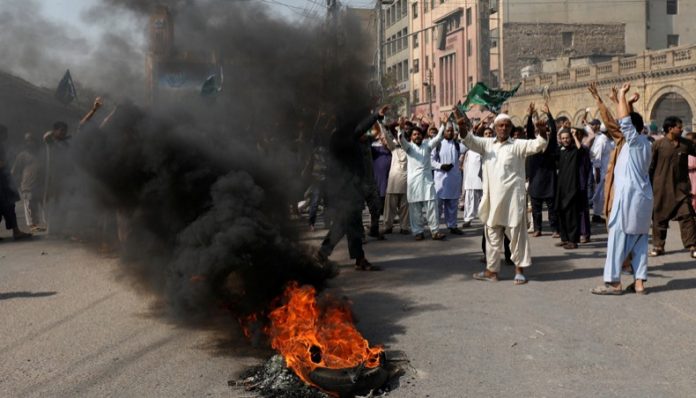 ISLAMABAD: The Federal Investigation Agency (FIA) on Monday began collecting data of protesters who incited violence and caused destruction during country-wide demonstrations following a Supreme Court verdict acquitting Asia Bibi.
Minister of State for Interior Shehryar Afridi has summoned a report today from the FIA, National Database Registration Authority (NADRA) and Pakistan Telecommunication Authority (PTA) regarding the identities of the rioters.
Earlier, during a meeting chaired by the state minister it was decided that assistance will be sought from the Ministry of Defence to identify the rioters.
Meanwhile, criminal proceedings are under way against rioters and police has been registering cases and arresting those involved in damaging property and harassing citizens. In Islamabad, 500 people have been booked and 12 have been arrested.
Further, orders have been issued to imprison 19 rioters under the Maintenance of Public Order (MPO). According to Islamabad administration, 33 rioters have been identified.
The government has also established a complaint cell to collect videos of miscreants involved in damaging property and harassing citizens.
According to the Ministry of Interior, citizens can share pictures and videos of those involved in damaging state and private property by WhatsApping on 0331 5480011. The ministry has assured that the name and number of citizens who share pictures and videos of violent protesters will be kept confidential.
The ministry on Sunday released initial pictures of the miscreants involved in vandalising property and harming common citizens during the demonstrations, which ended on Friday after the government reached an agreement with the protesters.
Police said 500 people, including Tehreek-e-Labbaik Pakistan (TLP) chief Khadim Hussain Rizvi and senior leader Afzal Qadri, have been booked in 11 cases. The suspects face charges of disrupting peace and blocking roads in Lahore.