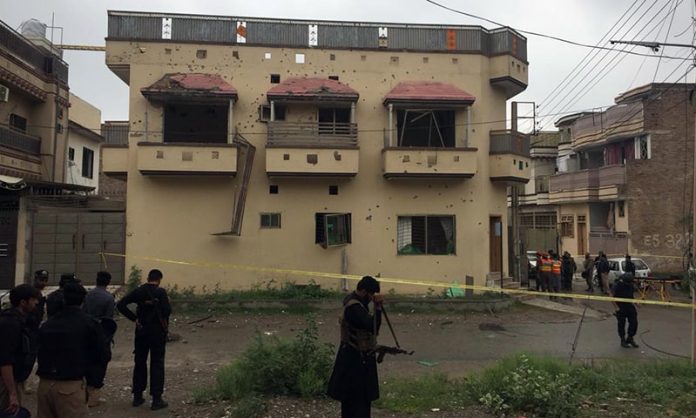 PESHAWAR: A First Information Report (FIR) was registered at the Counter-Terrorism Department (CTD) police station of the Hayatabad operation in which five terrorists were eliminated in joint-action carried out by Police and Pakistan Army personnel.
According to the FIR, Pakistani CNICs were found from four neutralised terrorists however Afghanistani passport from another.
The FIR has been registered by SHO Tatara under sections of police encounter and seven ATAs.
Names nominated in the filed FIR include Tariq Usman, Feroz Shah, Mehmund Imran, Amjad Afridi and Murad.
Earlier on April 16, Pakistan Army’s media wing Inter-Services Public Relations (ISPR) confirmed that the night-long operation at a home in Peshawar’s Hayatabad concluded after the forces neutralised all hiding terrorists.
In a statement issued by ISPR, it is said that Pakistan Army and Khyber Pakhtunkhwa police carried out a successful joint-operation against terrorists at a home in Phase-VII of Hayatabad.
According to ISPR, five terrorists were eliminated in the joint operation whose dead bodies were sent for identification.
At around 10:30 pm on Monday, Law Enforcing Agencies (LEAs) raided the house on secret information indicating the presence of few terrorists taking refuge in the area.
Other houses in the neighbourhood were vacated and sounds of explosives going off were also heard at the area.
The terrorists opened directed firing due to which a cop embraced martyrdom, two other policemen got injured and an Army official also received gunshot wounds.
Corps Commander Lt Gen Shaheen Mazhar Mehmood also paid a visit to the spot to review the proceedings of the operation against terrorists and lauded efforts and preparedness of the KP police and Army men.
In a statement. KP Information Minister Shaukat Yousufzai also confirmed the death of police personnel.