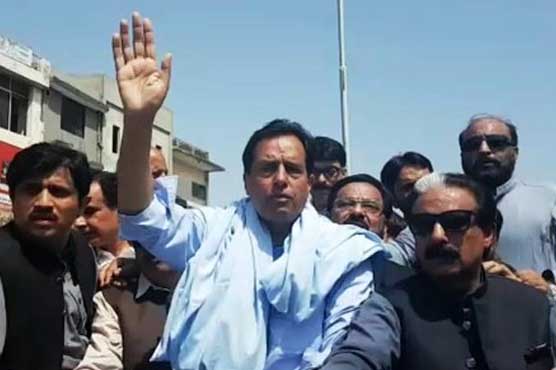 RAWALPINDI: Cases against former Prime Minister Nawaz Sharif’s son-in-law Captain (r) Safdar have been registered for violating section-144 during Rawalpindi rally.
According to details, other 15 Pakistan Muslim league-Nawaz (PML-N) leaders including Chaudhry Tanvir, Daniyal Aziz and Ziaullah Shah have also been booked.
Captain (r) Safdar, while leading a rally to Liaquat Bagh on Sunday, had surrendered to National Accountability Bureau (NAB) after accountability court sentenced him to one year in prison in Avenfield reference.
On the occasion, huge number of PML-N supporters and leader chanted slogans and welcomed the move of Nawaz’s son-in-law. They also barred officers from arresting Safdar during the rally.
After the detention, Captain Safdar was taken to the bureau for medical checkup.
However, early today (Monday), he has been shifted to Adiala Jail after appearance in the court.
It is to be mentioned here that Safdar’s name was placed on the black list, which means he would be barred from leaving the country.
An accountability court on Friday sentenced Nawaz Sharif to 10 years, Maryam Nawaz to 7 years and Captain Safdar to 1 year in prison for corrupt practices linked to his family’s purchase of upscale London flats.
Nawaz’s daughter, Maryam, widely seen as his chosen political heir, was sentenced to seven years in prison and is disqualified from contesting the elections.
“Today’s verdict shows that these Avenfield apartments were purchased using corruption money,” prosecution lawyer Sardar Muzaffar Abbasi told reporters, citing the name of the apartment building in London.
The father-daughter duo, who are in London tending to Nawaz’s wife, Kulsoom, who is being treated for cancer and is in a coma after suffering a heart attack last month, announced July 13 as the date for their return.