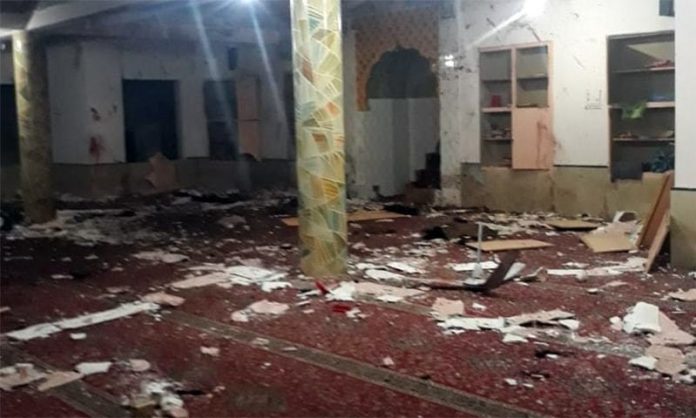 QUETTA: A first information report (FIR) by the Counter Terrorism Department has been registered in the Quetta blast case in which at least 15 persons including Deputy Superintendent of Police (DSP) Ammanullah and the Imam of the mosque were martyred.
The tragic incident had occurred on Friday in a Satellite Town’s mosque during Maghrib prayers. More than 20 people sustained injuries who are undergoing medical treatment at civil hospital.
Balochistan Home Minister Zia Langove and Quetta Deputy Inspector General (DIG) Abdul Razzaq Cheema visited the incident place today. Zia Langove termed the occurrence as a cowardly terrorist attack. The police officials maintained that investigations into the matter are ongoing and the militants will soon be traced.
DSP Ammanullah’s funeral prayers were offered at Police Lines. President Arif Alvi, Prime Minister Imran Khan and Chief of Army Staff General Qamar javed Bajwa strongly condemned the attack and expressed grief over the casualties.
“I have demanded an immediate report on the condemnable cowardly terrorist attack in Quetta targeting a mosque and people at prayers. I have asked provincial government to ensure all medical facilities are provided to the injured. Martyred DSP Haji Amanullah was a brave and exemplary officer,” PM Imran said.
“Every possible assistance will be given to police and civil administration. Those who targeted innocents in a mosque can never be true Muslim,” COAS Bajwa said.
Provincial home minister Zia Ullah Langu talked to media after the blast and said that investigations by bomb disposal officers indicated that a suicide bomber carried out the attack.
Balochistan Chief Minister Jam Kamal Khan and Governor Abdul Quddus Bizenjo condemned the blast and expressed grief over loss of lives. Jam Kamal directed security agencies to take stringent measures across the province to ensure citizens remained safe and secure.