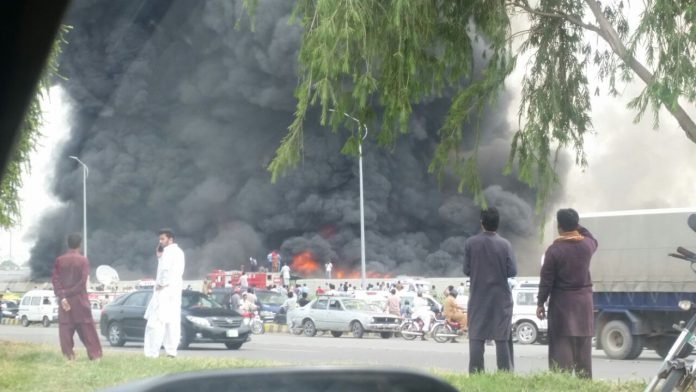 ISLAMABAD: Hundreds of stalls in Sasta Bazaar in H-9 sector here were reduced to ashes as a horrific fire erupted Wednesday morning.
The fire reportedly erupted after a battery exploded and engulfed the stalls of vegetables, fruits, crockery, shoes and garments.
The deadly fire spread quickly giving the owners no time to save their businesses. Many distressed stall owners were seen weeping.
According to CDA, as many as 650 stalls were burnt to ashes in the incident. Luckily, nobody was hurt in the fire.
Twenty fire fighter vehicles and water tankers rushed to the incident site to control the fire. Mayor and Capital Development Authority (CDA), Chairman Sheikh Anser Aziz, SSP Islamabad Sajid Kiani and senior police officials went to the site and monitored the relief and rescue operations.
Teams of National Disaster Management Authority (NDMA) and USAR took part in the operation to put out the fire.
Several ambulances from different NGOs, foundations, Rescue 1122 were stationed around the bazaar.
The stall owners tried to save their merchandise but they did not succeed.
The police surrounded the bazaar and evacuated people.
Talking to APP, a handicraft stall owner Tariq Mehmood said he had 20 to 22 stalls in the Sasta Bazaar and he suffered a loss of Rs 8 to 9 million.
Shoe stalls owners, Malik Bismillah and Musa Khan said they had four shoe stalls in the Sasta Bazaar which had been burnt.
The stall owners demanded of the higher authorities to hold an inquiry into the unfortunate incident.
Meanwhile CDA spokesperson Mazhar Hussain told APP that the cooling process had been started to extinguish the fire. – APP