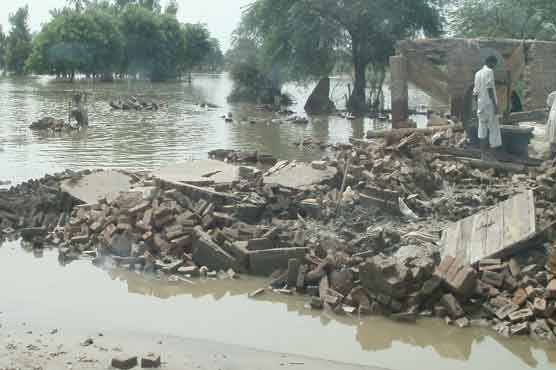 PESHAWAR: Five persons, including a woman, were killed and four others injured in two rain related incidents in South Waziristan.
According to District Administration of South Waziristan, a woman and two children were killed in Sarwakai area while three other persons were killed in Birmal area of the district due to roof collapse.
Death toll from the ongoing spell of rains reached 15 while 22 people received injuries during the last two days in Khyber Pakhtunkhwa. Bad weather also caused damage to residential quarters and provincial government directed the authorities concerned to provide relief to the affected people in the rain-hit districts.
Reports said that a woman and her minor child were killed when roof of their house collapsed in Shewa area of North Waziristan tribal district. Another member of the family received injuries in the incident and was shifted to a local hospital.
According to reports, four people were killed while four others received injuries in rain-related incidents in different parts of South Waziristan tribal district. A woman and two children were buried alive under the debris when house of Umair Mehsud collapsed in Servikai area.
Another rain-related incident occurred in Birmal tehsil where two minor boys, whose names could not be ascertained, were killed and four persons received injuries when roofs of several houses caved in due to heavy downpour.The injured were shifted to district headquarters hospital in Wana. Many parts of the district received heavy snow that blocked the roads.
Officials said that 55-Brigade of army started operation to remove snow and earth from the main roads. Chief Minister Mahmood Khan also took notice of the weather-related incidents in North and South Waziristan tribal districts and plight of the internally displaced persons at Bakakhel camp.
Provincial Disaster Management Authority (PDMA) reported death of two people in Charsadda and Tank districts. The authority said that eight more people received injuries. A statement issued here said that bad weather caused damage to 31 houses in different parts of the province.
Another person received injuries in Landi Kotal, Khyber tribal district. Officials said that eight-year-old son of Zar Noor Afridi was injured when roof of a room collapsed due to continuous rain. Rain also caused damage to two houses in Kandukhel and Alamkhani localities of Landi Kotal.
Reports from Tirah valley said that roads to most parts of the valley were closed due to heavy snowfall. The closure of roads also caused shortage of daily use items in Lar Bagh Markaz. Rain also caused partial damage to houses in different parts of Orakzai tribal district.
Snowfall and rain continued for third consecutive day in Shangla district that resulted in blockade of roads. Power supply remained suspended in Bisham and other areas, multiplying miseries of local people. The fresh spell of snowfall started in the district on Friday continued on Sunday.
The landslide caused by continues rain and snowfall also blocked many roads in upper parts of Hazara.
The rain and snowfall, which started on Saturday evening, continued intermittently the entire day plunging the mercury to freezing point in high mountains parts of Hazara division.
The Oghi-Darband Road was blocked at various places. Nawazabad-Munda Chucha Road was also blocked to all sorts of traffic following heavy landslide. Many link roads were also blocked in Kaghan, Siren and Konsh valleys following landslide caused by heavy rain.