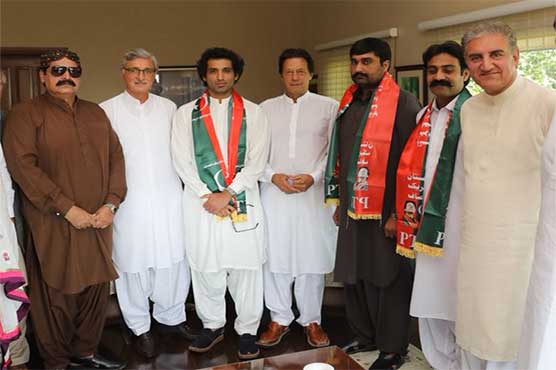 ISLAMABAD: Pakistan Tehreek-i-Insaf (PTI) is racing ahead speedily in the number game of centre and Punjab province as several MPAs and MNAs have either joined the party or set to become a part of it.
MNA Asim Nazeer from NA-101 and four MPAs namely Taimoor Lali, Taimoor Bhatti, Alamdar Qureshi and Khurram Leghari met Jehangir Tareen and decided to join PTI.
Three more MNAs from Balochistan are likely to meet PTI chairman Imran Khan in Bani Gala today. Akhtar Mengal will also be among them.
Besides them, MNA Amjad Khosa and MPA Mohsin Ata Khan have finalized the matters with PTI with only official announcement pending.
On the other hand, PTI’s strategic committee meeting is scheduled to be held today for which the party leaders have reached Bani Gala.
Sources say that names of Punjab and Khyber Pakhtunkhwa Chief Ministers will be decided in the session.
PTI spokesperson Fawad Chaudhry has already claimed to have secured majority in both Centre and Punjab and announced to form government.
Fawad stated that PTI has obtained support of as many as 168 lawmakers in National Assembly and 180 lawmakers in Punjab Assembly. The tally has risen after the new arrival of members.