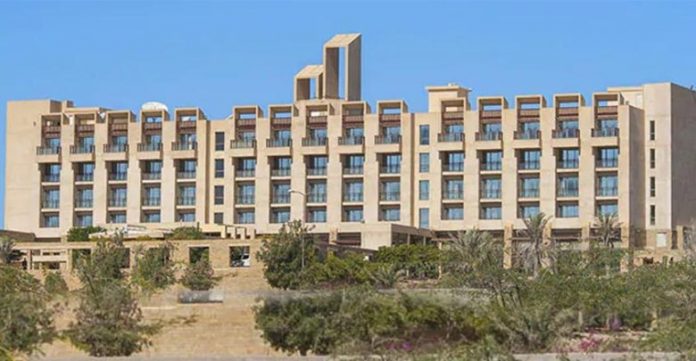 GWADAR: At least five people lost their lives in a terror attack targeting the Pearl Continental in Gwadar yesterday, the army’s media wing said in a statement on Sunday, as it announced the conclusion of its clearance operation of the hotel.
Four hotel employees ─ three staffers and a security guard ─ were killed and a navy soldier was martyred, while six people, including two army captains, two navy soldiers, and two hotel employees, were injured as gunmen stormed the luxury hotel.
The attack was claimed by the banned Balochistan Liberation Army, and a clearance operation at the hotel continued until late at night.
The army on Sunday afternoon announced that security forces had completed the operation at the hotel, killed three terrorists and retained their bodies for identification.
“The terrorists had attempted entry into the hotel aimed at targeting/taking hostage the guests present in the hotel,” the ISPR statement said.
“The security guard at the entry challenged the terrorists, denying them entry into the main hall, and the terrorists went to the staircase leading to the upper floors,” the statement added.
The terrorists opened fire, killing security guard Zahoor. “Enroute to the stairs, the terrorists kept firing indiscriminately, resulting in the martyrdom of three more hotel employees, Farhad, Bilawal and Awais, while two got injured,” the ISPR said.
The army’s media wing said that the Quick Response Forces of the army, navy and police immediately reached the hotel, secured the guests and staff present there, and restricted the terrorists within a fourth floor corridor.
“After ensuring safe evacuation of guests and staff, a clearance operation was launched to take on the terrorists,” the statement said.
“Meanwhile, the terrorists had made CCTV cameras dysfunctional and planted improvised explosive devices on all entry points leading to fourth floor.
“Security forces made special entry points to get onto the fourth floor, shot down all terrorists and cleared planted IEDs,” the ISPR said.
Pakistan Navy soldier Abbas Khan was martyred in an exchange of fire, while four other army and navy captains were injured.
The army’s media wing also thanked the media for its responsible reportage during the operation, which “denied the terrorists of possible live updates” and “facilitated the security forces in smooth execution of the operation”.
In the aftermath of Gwadar attack, the Balochistan government has tightened security across the province. Chief Minister Jam Kamal chaired a high-level meeting to review security arrangements in Gwadar and other parts of the province.