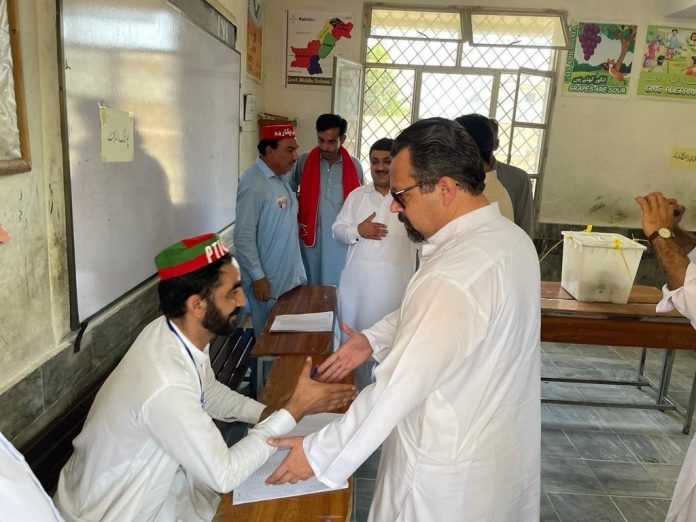 PTI was contesting against the combined candidate of all the opposition political parties for a seat left vacant following the demise of ANP MPA Waqar Khan.

However, PTI registered an impressive win against the PDM backed ANP candidate Hussain Ahmed by winning the PK-7 seat with a margin of 2,791 votes. The ANP won this seat in a by-election in 2018 by a margin of 280 votes but failed to retain it this time.

The ANP has rejected the result and said that it would challenge the result after holding consultations and questioned why the ECP was quiet on the use of government machinery and the release of funds overnight.

However, political experts say that it is a big blow to the grand alliance of the opposition parties for the 2023 general elections to take on the PTI in the province where the party has been in power since 2013. There are a few reasons why and how ANP faced a humiliating defeat.

Home district of the CM

The main factor in the victory of the PTI candidate Fazl Mula is that Swat is the home district of Chief Minister Mahmood Khan, and the PTI candidate had an edge over the rival candidate. The CM, Mahmood Khan, had pumped the funds into the constituency and announced a full package in the form of development projects such as an engineering university in PK-7, a PAEDS hospital, and many other schemes in Kabal Tehsil. PK-7 is also the home constituency of former federal minister Murad Saeed.

The ANP candidate also failed to collect the votes from the voters of the other political parties. The PDM parties were eyeing the seat to get momentum for the next general election, but the opposition combine card failed dramatically as workers distanced themselves from the by-election.The lack of interest on the part of PDM local and provincial leadership was a factor in Hussain Ahmed losing, and the ruling party candidate easily won the seat from ANP.

The absence of the ANP leadership in the campaign

The PTI leadership, including its ministers and lawmakers, invested more time, energy, and resources in winning the seat than the ANP. Contrary to PTI, the national and provincial leadership of the ANP including Haider Khan Hoti, Aimal Wali Khan, Mian Iftikhar and Sardar Hussain Babak did not participate in campaigning. There are currently significant splits and differences in the ANP ranks both at the provincial and national levels that also contributed in the defeat of its candidate.

The PK-7 by-election was not the first that ANP lost. In the Hangu NA- 33 by-election held in April, the ANP bagged only 3,314 votes and while only 4,236 votes in PK-63 Nowshera by election. In the second phase of the LG elections, held in 65 tehsils of the 18 districts of the Khyber Pakhtunkhwa. However, the party neither, despite announcement, neither investigated the reasons nor devised a better strategy for Swat by poll.

Political experts say that the unholy alliance of the rightist and leftist political parties, unclear direction, and avoiding public issues are the main reasons behind the failure of the opposition’s combined card۔

Response to the PTI’s narrative

During the period when Imran Khan stayed in power, the PTI was constantly losing popularity in by-elections across the country. For example, in KP, the PTI lost 5 provincial assembly seats that it had won in the 2018 general elections and the first phase of local government elections in December last year. But after ousting Imran Khan from power through a no-confidence motion, the PTI started regaining lost ground and bounced back in the second phase of the LG elections. The results of the second phase of the LG polls and then the result of NA-33 Hangu have come as a surprise to several party leaders, including the military leadership.

Political experts say that the PK-7 Swat by-election was a test of the PDM’s political parties for the pre-election grand alliance for the 2023 assembly elections. The next election will be between PTI and all others.