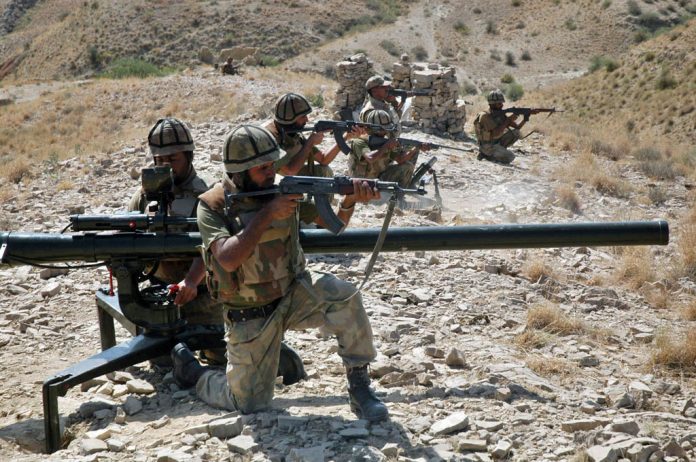 PESHAWAR: Five terrorists were killed in an intelligence-based operation conducted by Pakistan Army in Data Khel, a town in North Waziristan district of Khyber Pakhtunkhwa, according to military’s media wing Inter-Services Public Relations (ISPR).
Two soldiers namely Sepoy Asad Khan and Sepoy Muhammad Shamim were martyred in exchange of fire with the terrorists.
Yesterday, five terrorists were killed in a gunbattle with Pakistani forces in Turbat, Balochistan, when security forces raided a terrorists’ hideout in an intelligence-based operation.
Security officers also seized a huge cache of arms from their possession, and shifted their bodies to a hospital for legal formalities.
The dead terrorists were identified as Nawaz aka “Commandant”, Zafar aka “Dhodha”, Jameel aka “Tatek” and Meero. One of the terrorists could not be identified yet.
Pakistani forces have conducted a series of operations against militant groups in the tribal districts of Khyber Pakhtunkhwa and Balochistan over the years. Officials say the area has largely been pacified, however small attacks continue to take place.