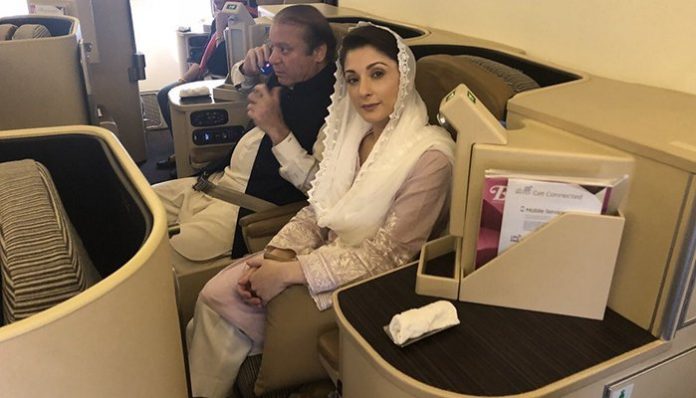 LAHORE: The flight carrying former prime minister Nawaz Sharif and his daughter Maryam Nawaz has landed at the Lahore airport.
Nawaz Sharif along with daughter Maryam Nawaz has arrived in Lahore, a week after the two were handed down prison sentences in the Avenfield reference.
Nawaz and Maryam had departed from Abu Dhabi after their flight was delayed for over two hours. They had left London a day earlier.
A PML-N rally headed by party president Shehbaz Sharif is heading towards the Allama Iqbal Airport and is currently at Charing Cross.
The National Accountability Bureau (NAB) said it has arranged two helicopters, which are expected to shift the father-daughter duo to Adiala jail in Rawalpindi as soon as they land. NAB has also deployed two teams each at Lahore and Islamabad airports for this purpose.
NAB Chairman Justice (retd) Javed Iqbal has warned that strict action would be taken against anyone who obstructs the arrest of the PML-N leaders. The party, however, has claimed that it would only take out a peaceful rally at the airport to welcome its leader.
The convoy of former federal minister Khawaja Asif, which was headed from Sialkot to Lahore, has been stopped near Kamoke.
A large contingent of police and Rangers has been deployed at GT Road.
A clash has taken place between PML-N workers and police at Ravi toll plaza. Police said three personnel, including an assistant sub-inspector and two constables, were injured in the clash.