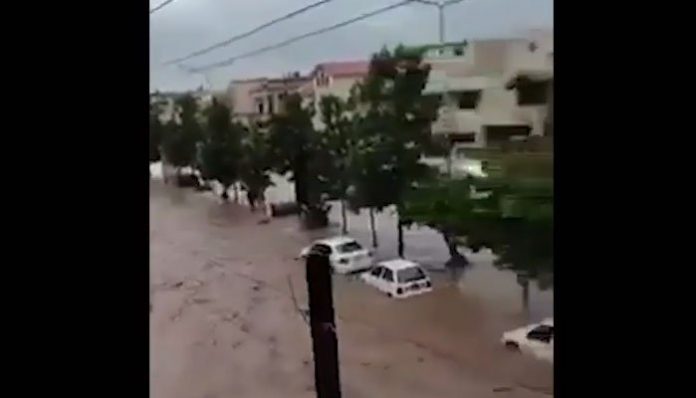 The administration rescued three children, while one child and the mother drowned, the family added. An uncle of the deceased child told that water entered their house at around 6 in the morning due to which a wall in the backyard fell.

“Water accumulated in the basement of the house, drowning five members of the family, including four kids.”

He said they started rescue efforts on their own while the administration reached the area after 8:30am.

Sources in the Pakistan Meteorological Department said that some areas in Islamabad received up to 330mm of rain in the last few hours.

Videos from Islamabad’s sectors E-11 and D-12 show cars floating in gushing waters after heavy rains that lashed the federal capital for hours.

In a weather update on his official Twitter handle, the deputy commissioner said, “Cloudburst in Islamabad has caused flooding in various areas. Teams are clearing nullahs/roads. Hopefully we will be able to clear everything in an hour”. Later, the DC announced that the Islamabad roads were clear for traffic.

However, Islamabad additional deputy commissioner was of the view that the nullahs started overflowing after three hours of incessant rains and then the water entered houses. Responding to a question about the death of a woman and her child, the officer said that they would not tolerate such negligence again from rescue teams.

Contrary to the deputy commissioner’s statement, the Met office claimed that no cloudburst was reported in the jurisdiction of Islamabad. Islamabad received heavy monsoon rains, it said, adding that 123mm rain was recorded in the federal capital.

“Heavy rains caused high water level in Nullah Lai and water accumulation in E 11, the Inter-Services Public Relations said in a statement. It said that army troops are busy in assisting civil administration in rescue and relief efforts.

Earlier, a spokesperson of the National Disaster and Management Authority said that after heavy rains in Rawalpindi and the danger of possible flooding in Nullah Lai, local administration and emergency services were alerted to deal with any emergencies.