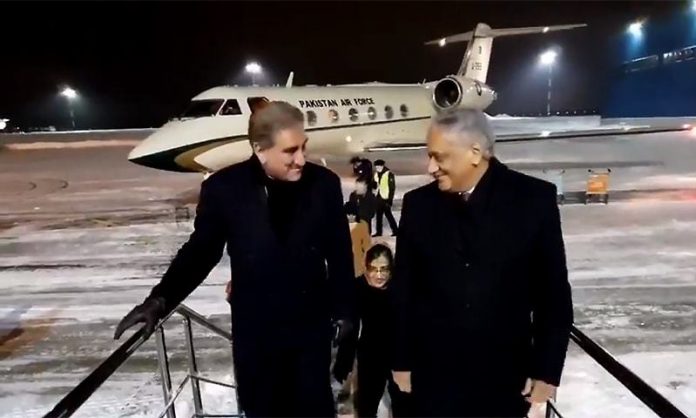 MOSCOW: Foreign Minister Shah Mahmood Qureshi arrived in Moscow ─ his last stop on a whirlwind four-nation tour ─ on Wednesday, where he is expected to meet his Russian counterpart Sergey Lavrov and other foreign ministry officials.
Qureshi was received by Russian officials upon his arrival in Moscow.
In the first two days of his three-day trip, the foreign minister visited Kabul, Tehran and Beijing, where he met his counterparts and other high-ranking officials. He discussed regional peace and stability and matters of mutual interest with the three neighbours.
During his trip to Kabul on Monday — his third since he became foreign minister in August — Qureshi met Afghan President Ashraf Ghani and Foreign Minister Salahuddin Rabbani. During his meetings, the foreign minister stressed the importance of peace in Afghanistan for regional stability and renewed Pakistan’s commitment to assist in the process.
With his Iranian counterpart Javad Zarif on his trip to Tehran on the same day, the foreign minister discussed bilateral relations and regional situation. Both officials agreed on the importance of improved bilateral relations between the two countries.
He visited Beijing on Tuesday, where he met Chinese Foreign Minister Wang Yi. The two discussed “bilateral and regional issues, especially peace in Afghanistan”, according to Foreign Office Spokesperson Dr Mohammad Faisal.
The US decision to pull nearly half of its troops from restive Afghanistan was high on the agenda at the meeting between the Pakistani and Chinese foreign ministers. China has not announced an official stance on the US troop pullout, but Pakistan on Saturday welcomed the decision to slash US troop numbers calling it “a step towards peace” in war-torn Afghanistan.
In recent months, China has played a more active role in brokering peace in the region as stability in Afghanistan is critical to its Belt and Road policy of expanding trade links across Asia.
Pakistan, too, has been playing an active role in the peace process in Afghanistan. Last week, the country brokered a meeting between the United States and the Taliban in Abu Dhabi in a bid to pave the way for reviving the peace process that has remained stalled since 2015.
The talks were arranged after the US President Donald Trump wrote a letter to Prime Minister Imran Khan seeking Pakistan’s help in mending Afghan peace process. The overture came after a patch of tense ties between the US and Pakistan since President Trump last year announced his Afghanistan and South Asia strategy in which Islamabad was accused of not acting against terrorist safe havens.
During the course of its bad patch in ties with the US, Pakistan increased its interactions with China, Iran, and Russia for Afghan peace. Now that Pakistan has agreed to assist the US in achieving peace in Afghanistan, Qureshi’s visit is meant to reassure regional partners that Islamabad is not ditching them on the Afghan reconciliation issue.