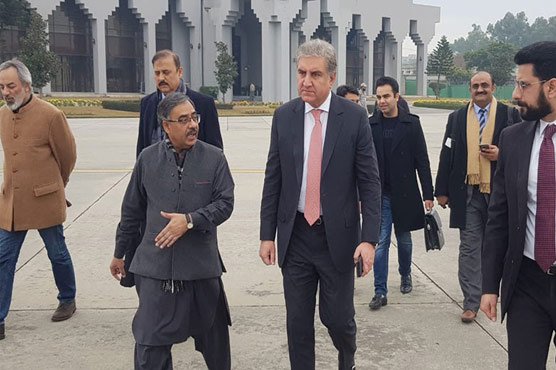 ISLAMABAD: Foreign Minister Shah Mahmood Qureshi on Sunday departed for visits to Iran and Saudi Arabia following the directives of Prime Minister Imran Khan to defuse Middle East tensions between Iranian regime and the U.S.
FM Qureshi will hold talks with his counterparts in Iran and Saudi Arabia to convey Pakistan s desire to help in de-escalating the situation.
During his visit to Tehran, the foreign minister will meet Iranian Foreign Minister Javad Zarif to exchange views on the evolving situation in the region.
Tomorrow, he will visit Riyadh to hold talks with Saudi Foreign Minister Prince Faisal bin Farhan Al Saud and exchange views regarding regional peace and stability.
The recent developments seriously endanger peace and security in an already volatile region and underscore the need for immediate and collective efforts for a peaceful resolution.
During these visits, Mr Qureshi will share Pakistan’s perspective on the current situation by stressing the imperative of avoiding any conflict.
He will convey Pakistan’s readiness to support all efforts that facilitate resolution of differences and disputes through political and diplomatic means.
Earlier, Turkish Foreign Minister Mevlut Cavusoglu in a telephonic conversation with Shah Mehmood Qureshi on Saturday extended condolences on the Quetta mosque blast, and praised Pakistan’s effort for de-escalating tensions in the region.
Turkish FM expressed grief on the terror attack in the provincial capital of Balochistan which claimed many innocent lives. He condemned the loss of valuable lives and expressed solidarity of Turkey with Pakistan on this tragic incident.
The two Foreign Ministers also exchanged views on the regional situation, with a particular focus on recent developments in the Middle East.
Meanwhile, Mevlut also ensured full support of Turkey to Pakistan on establishing peace in the region following the killing of the Iranian top military commander, Qasem Soleimani, by the US. He appreciated Pakistan‘s endeavours and expressed Turkey‘s support to all efforts for promoting peace and stability in Mideast.
Qureshi also apprised his counterpart of his upcoming tours of Iran, Saudi Arabia and the United States. Similarly, Turkish FM briefed his Pakistani counterpart on his recent visit to Iraq during which the situation in the region was discussed.
Foreign Minister Shah Mehmood Qureshi said Iran’s confession of unintentionally shooting down a Ukrainian passenger plane is likely to reduce concerns over the matter.
The foreign minister said in his statement that the region cannot afford another war and stressed that Pakistan will continue to play its role in lessening the ongoing tensions.
Shah Mehmood Qureshi told that he is leaving for Iran on Prime Minister Imran Khan’s directions and will hold meetings with the Iranian leadership.
Conflict between Iran and the United States should be cut down and US President Donald Trump’s recent statement is a ray of hope in this regard, Qureshi said.
It is pertinent here to mention that Iran admitted that it unintentionally shot down the Ukrainian passenger plane due to human error killing all 176 people on board.
Iranian President Hassan Rouhani said in a tweet, “Armed Forces’ internal investigation has concluded that regrettably missiles fired due to human error caused the horrific crash of the Ukrainian plane & death of 176 innocent people.
“Investigations continue to identify & prosecute this great tragedy & unforgivable mistake.
“The Islamic Republic of Iran deeply regrets this disastrous mistake.
“My thoughts and prayers go to all the mourning families. I offer my sincerest condolences.”
Iranian Foreign Minister Mohammad Javad Zarif tweeted, “A sad day. Preliminary conclusions of internal investigation by Armed Forces:
“Human error at time of crisis caused by US adventurism led to disaster
“Our profound regrets, apologies and condolences to our people, to the families of all victims, and to other affected nations.” …Agencies