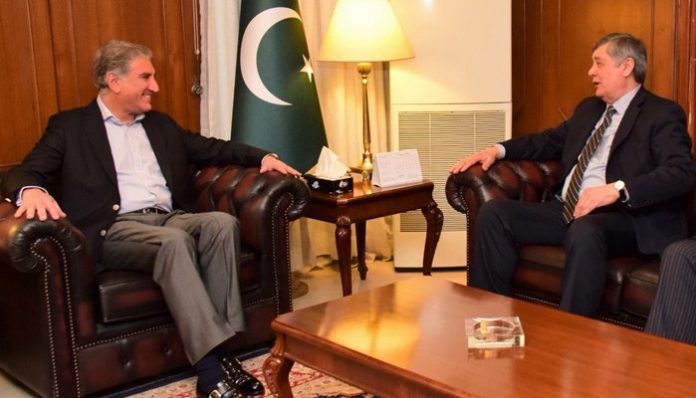 ISLAMABAD: Russian President Vladimir Putin’s special envoy for Afghanistan Zamir Kabulov called on Foreign Minister Shah Mehmood Qureshi at the Foreign Office on Tuesday.
Kabulov and Qureshi discussed the current regional situation during the delegation-level talks.
The Russian special envoy said Pakistan has a crucial role in the Afghan peace process. Kabulov appreciated Pakistan’s role and efforts for Afghan peace and reconciliation, FO Spokesperson Muhammad Faisal said.
Meanwhile, Qureshi said Afghan peace is necessary for peace and stability in the region. “Pakistan will continue to play its role for Afghan peace,” he added.
Kabulov is on a two-day visit to the country to discuss the Afghan peace process with Pakistani officials. Kabulov was received by senior officials of the Foreign Office and Russian Embassy.
Acting US Defense Secretary Patrick Shanahan said on Monday peace talks between the US and the Taliban were “encouraging.”
His remarks came after US special envoy Zalmay Khalilzad was quoted Monday as saying the US and the Taliban have drafted the framework of a deal which could pave the way for negotiations with the Afghan government.
“I´d say really the takeaway right now: it´s encouraging,” Shanahan told Pentagon reporters as he waited to greet NATO Secretary General Jens Stoltenberg.
Khalilzad has been leading a months-long diplomatic push to convince the Taliban to negotiate with Kabul, but the militants have steadfastly refused, dismissing the authorities as “puppets.”