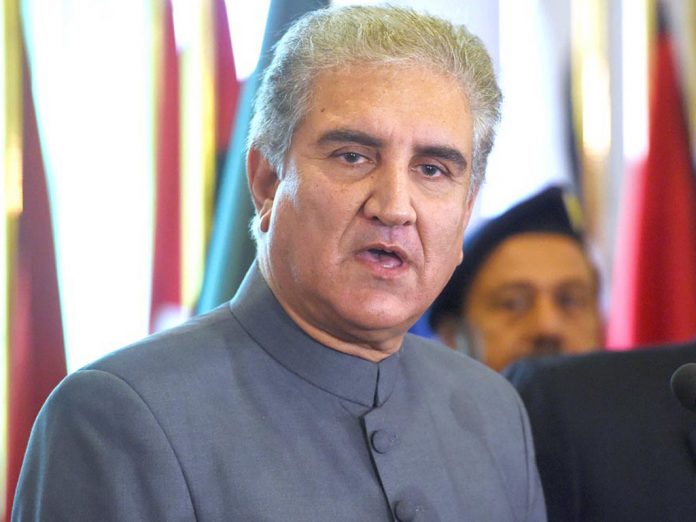 ISLAMABAD: Foreign Minister Shah Mehmood Qureshi Tuesday said that after passage of the resolution in Senate on blasphemy against Prophet Muhammad (PBUH) on Monday, he wrote letters to Secretary General Organization of Islamic Cooperation (OIC) asking him to call meeting of the permanent representatives of OIC based in Jeddah.
Speaking in the Senate here, he said if steps were not taken against blasphemy it would ignite religious extremism. The cabinet in the first meeting expressed its anger and grief on the issue of blasphemy and the Dutch ambassador was called to the Foreign Office to make him aware of the situation,
he added.
Letters were also written to the six member countries of OIC, he told. Shah Mehmood said he would raise the issue at OIC forum during the meetings of the United Nations General Assembly.
The minister said previously after incidents of blasphemy, OIC warned of blockade of goods of countries where blasphemy was being committed and that sent a message to those countries.
He said the issue would be raised with the European Union as well, adding he was conveyed by PTA that it blocked 32,000 websites and links posting blasphemous material.
He said Dutch Foreign Minister was likely to contact him and he would convey feelings of people of Pakistan and representatives of Parliament.
Freedom of speech and expression had its limits and the west also set the limit by not allowing people to distort events of the holocaust, he said adding no civilized society allowed limitless freedom as happened in the case of language used against women that led to feminist movement.
He said mistreatment of Muslims in Myanmar was seen by the world and the champions of human rights.
He assured that Pakistan’s sympathy was with the Muslim refugees in Myanmar, as it was a humanitarian issue.
The minister said the situation in Indian Occupied Kashmir was evident before everybody as human rights were being violated.
He said India needed to revisit its policy in Occupied Kashmir as a genuine movement was continuing in the valley against Indian oppression.
“I will continue to raise the issue as is the demand of the members of the Senate and people of Pakistan.”
He said Pakistan was facing a water crisis and the issue became grave due to negligence of the previous government, adding availability of water was critical for Pakistan’s economy and agriculture.
Quresi said India and Pakistani experts should sit together to resolve the issue in line with international agreements and practices.
The government would do its utmost to advance the viewpoint of Pakistan, he added.
The minister said Pakistan was on the grey list of Financial Action Task Force (FATF) and there was concern that it might be moved to the black list.
He said he was certain that the international community would understand position of Pakistan, adding terror financing and terrorism were interlinked and the menace had cost lives of thousands of Pakistanis.
Senator Maula Bux Chandio raised the issue of imposition of taxes by those using Indus Super highway in Sindh and the seizure of land by authorities along the highway. The deputy chairman Senate referred the matter to the relevant committee.