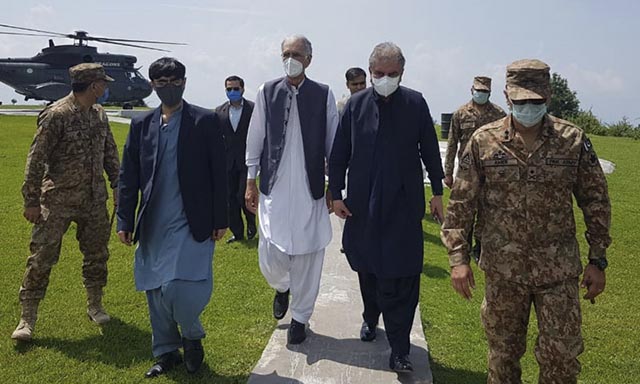 ISLAMABAD: Foreign Minister Shah Mehmood Qureshi, Defense Minister Pervaiz Khattak and Special Assistant to Prime Minister (SAPM) on National Security Moed Yusuf visited Line of Control (LoC) at Chirikot sector on Monday to express solidarity with Kashmiris.
Military officials briefed Shah Mehmood Qureshi and Pervaiz Khattak in detail. The foreign minister paid tribute to soldiers of Pakistan Army and said that entire nation is proud their bravery.
Before departing for LoC, Shah Mehmood Qureshi said that one of the purpose of his visit is to assure Kashmiris that Pakistan’s entire nation and armed forces stand with them.
He added that a clear message is being sent to Indian government that Kashmiris have rejected Indian actions of August 5 and struggle of innocent Kashmiris for right to self-determination will continue until they get freedom.
Earlier, the foreign minister announced on Friday to observe ‘Youm-e-Istehsal-e-Kashmir’ (Day of Exploitation in occupied Kashmir) on August 5 (Wednesday) to mark one year of Indian government’s move of scrapping special status of the valley.
Last year, Modi government launched demographic apartheid in Illegally Indian Occupied Jammu and Kashmir and divided the region into three parts, he added.
FM Qureshi asserted that Kashmiri people are facing immense difficulties, pain and persecution under the continued military siege for the last one year. We are going to change the name of Kashmir Highway with Srinagar Highway, he told.