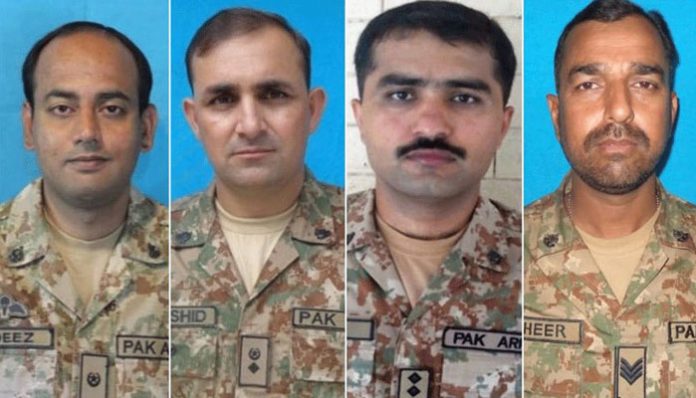 PESHAWAR: Four army personnel, including three officers, embraced martyrdom and four others sustained injuries on Friday when an improvised explosive device (IED) exploded in Kharkamar area of North Waziristan, according to the Inter-Services Public Relations (ISPR).
“Terrorists targeted military vehicle through an IED planted on road. 3 officers and a soldiers embraced Shahadat. 4 soldiers Injured,” the military s media wing said.
According to the ISPR, the martyred personnel include “Lt Col Raashid Karim Baig, a resident of Karimabad, Hunza, Major Moeez Maqsood Baig, a resident of Karachi, Captain Arif Ullah, a resident of Lakki Marwat and Lance Havaldar Zaheer, a resident of Chakwal”.
The Army s media wing further said: “This is the same area where forces had conducted search operations and arrested few facilitators [of terrorists].
“During last one month 10 security forces personnel have been martyred while 35 got injured including today s casualties,” it added.
President Dr Arif Alvi and Prime Minister (PM) Imran Khan have strongly condemned the terrorist attack.
In a statement, the President said the nation is united against the miscreants who are opposed to restoration of peace in the area but the nation is united against them.
He prayed for the departed souls to rest in peace and for the grant of courage to the bereaved families.
PM Imran Khan strongly condemned the terrorist attack on military vehicle through IED planted on road in North Waziristan.
In a statement, he paid rich tribute to army personnel who embraced martyrdom and sustained critical injuries in the attack.
He also expressed sympathy with the bereaved families of the officers and the soldier, and prayed for early recovery of the injured personnel.
PM Khan said that some elements are using the brave people of the tribal area but the state will never allow anyone to interrupt the peace. The premier stated he salutes the sacrifices and bravery of our soldiers in keeping us safe.
He said the whole nation stands behind them.
Special Assistant to the Prime Minister on Information and Broadcasting Dr Firdous Ashiq Awan on Friday also condemned the attack, and condoled with the families of the officers.
Dr Firdous, in a statement, said Pakistan had shown that its officers, jawans and people were united against terrorism.
The nation was proud of its martyrs as they laid down their lives for the defence and security of the motherland, and protection of the lives of citizens, she added. Dr Firdous said the ghastly acts of terrorism could not wave the resolve and determination of the nation.
She prayed Allah Almighty to rest the departed souls in eternal peace and grant courage to the bereaved families to bear the loss with fortitude.
She said the army, Rangers, police and personnel of other law enforcement institutions were offering their lives to eradicate terrorism.
“We share grief with the families of the martyrs,” she said.
Federal Minister for Interior Ijaz Ahmed Shah also condemned the attack and offered Fateha, and extended condolences to heirs of the officers.
“Such rogue elements cannot weaken Pakistan Army’s resolve,” he said, adding that the war against terrorism would continue until peace is restored, and the nation stands united with the armed forces.