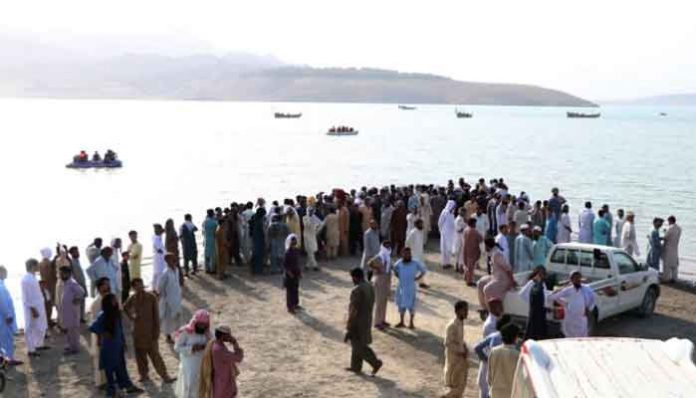 HARIPUR: Four children who died in a tragic boat accident a day earlier were laid to rest on Thursday in the Dedal Kamach area of Khyber Pakhtunkhwa’s Shangla district, as search efforts to recover the remaining victims continued into the second day.
About 50 people, including women and children, from Shangla’s Dedal Kamach area were on the boat, which capsized in the Indus River at Tarbela, Haripur district.
Local experts, Army SSG commandos and divers from nearby districts are all taking part in the search and rescue work.
The total death toll from the incident remains unclear. The identities of 10 passengers from Shangla have so far been verified.
Puran Deputy Superintendent of Police (DSP) Zerab Gul Khan said that the verification process of passengers is still in progress and about 10 people — including the four children — belonging to the different villages of Union Council Nusrat Khel have been verified.
Itbarullah, Hafizullah, Bakhti Yar, and Zahir Jalal, were identified as belonging to village Dedlal Pakhai and Umar Zada, Tahiroon, and Awais Khan were identified as hailing from Ramo Dedal.
From Kandaro in Shangla, Yasmin Bibi, Inamul Haq, and his sister, Sidra Bibi, were identified.
The DSP said that many of the victims were from the same families — fathers, spouses, sons and daughters.
The boatman, Nasib Jaan from Bher village Shangla, saved his life by swimming to the shore after the boat sank. He said that six animals and over 50 passengers were on board the vessel, but could not say how many managed to save their lives after it sank.
“I stopped at several stations, including Shangla district’s Dedal Kamach area, Torghar district, and Mansehra district’s Darband area, to collect passengers. Due to the movement of animals and the flow of the tide, the incident occurred,” he said.
“When the boat sank I caught the leg of a goat and it carried me as it swam to the bank of the river. My life was saved, while I saw many people drown in front of my eyes,” four-year-old Zahid told Dawn.
MNA Ibadullah Khan from Shangla, who was present at the spot said that an Army helicopter was also on site to shift dead bodies to the deceased’s respective hometowns.
He said that attempts are being made to pull out more bodies from the water, but the divers have not been very successful.
KP chief minister Mahmood Khan, along with KP Information Minister Shaukat Yousafzai — an MPA elect from Shangla — visited the site and inspected the rescue operations, ordering Haripur district’s deputy commissioner to provide all necessary assistance and facilities to the affected families.
He told media persons that roads and bridges will be built in Dedal, Shangla and in Torghar to avoid such incidents in future.