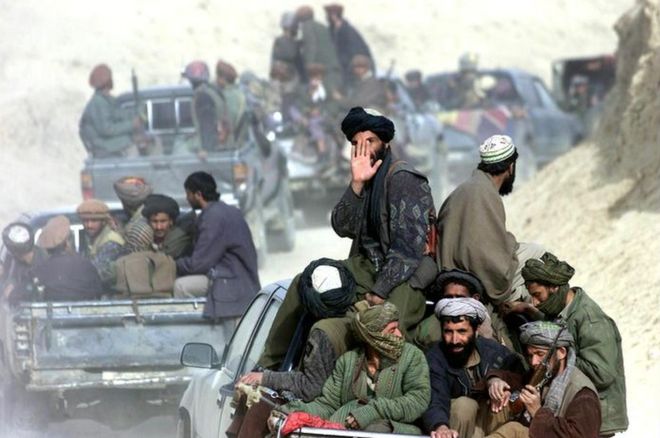 GARDEZ: U.S. air strikes in Afghanistan have killed four commanders of the Haqqani network, a militant group affiliated with the Taliban, as government forces try to retake a district captured by insurgents last week, Afghan officials said on Tuesday.
Naqeeb Ahmad Atal, a spokesman for the governor of Paktia province in eastern Afghanistan, said 120 militants were also killed in the strikes in Jani Khil, a strategically located district at a crossroads on a major route into Pakistan.
That toll could not be independently confirmed.
Insurgents overran the district centre late on Friday, gaining a significant success after stepping up attacks across the country in recent weeks, putting government forces on the back foot.
Afghan army spokesman Fazlkhuda Ibrahimkhil said U.S. drones carried out the air strikes that killed the commanders, hitting fighters gathered in the town overnight.
Colonel Michael Lawhorn, director of public affairs for Afghanistan’s NATO-led mission, confirmed that U.S. forces had carried out attacks in support of Afghan forces on Monday. He declined to provide details while the fighting was going on.
“I can confirm that U.S. forces conducted four air strikes,” he said in an emailed statement.
Another Afghan official said several military vehicles captured by the insurgents were also destroyed.
One senior Afghan security official, who spoke on condition of anonymity because he was not authorized to talk to the media, said about 1,200 fighters, most from the Haqqani network, were involved in last week’s attack on Jani Khil.
The involvement of Haqqani fighters, whose traditional stronghold has been in eastern Afghanistan, underscores the group’s key role in Taliban military operations following the death of Taliban leader Mullah Akhtar Mansour in a U.S. air strike in May.
Unlike Mansour, new Taliban leader Mullah Haibatullah Akhundzada, a religious scholar, is not believed to have much command experience.
His appointment has led many analysts to suggest a growing role for deputy leader Sirajuddin Haqqani, commander of the network named after his father, a veteran Islamist who battled Soviet forces during the 1980s and later sided with the Taliban.
The Haqqani network has been known for kidnappings and high-profile attacks in cities but is rarely known to take part in big attacks on Afghan government positions.
One of the commanders killed in the air strike had been district chief in Jani Khil for the Taliban. Another came from the Waziristan region on the Pakistani side of the border and was suspected of involvement in the killing of 42 construction workers in Jani Khil four years ago, Atal said.
The fighting came after the Taliban stepped up their offensive to oust the U.S.-backed government in many parts of the country after a lull following Mansour’s killing.
There has been heavy fighting in the southern province of Helmand as well as in the area around Kunduz, the northern city that briefly fell to the Taliban last year.– Reuters